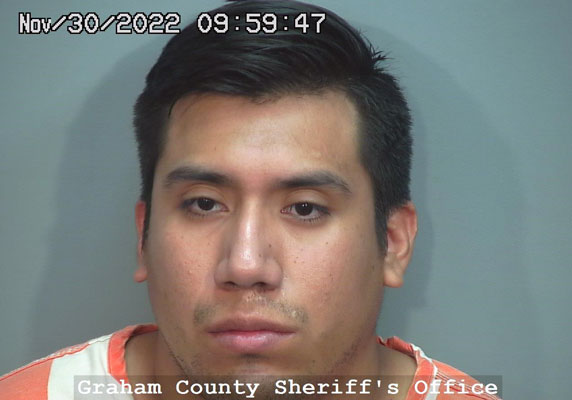 GRAHAM COUNTY – A suspect is facing prison time followed by deportation himself after being caught smuggling nine illegal immigrants.

David Alejandro Hernandez-Ramirez, 27, was arrested in the early morning of Nov. 30 and booked into the Graham County Adult Detention Facility on charges of human smuggling.

A deputy with the Sheriff’s Office received a tip from the Border Patrol regarding a suspicious 1998 Ford Expedition that had been seen on camera taking a “suspicious” route to and from Douglas. The Border Patrol advised the SUV may be on U.S. Highway 191 northbound toward Safford.

The deputy drove south on Highway 191 and just south of Safford saw the black Ford Expedition pull into the Jobi’s Market convenience store and get gas. The deputy made contact with the driver, Ramirez, who didn’t speak much English. Ramirez produced an Arizona ID card as well as a Mexican ID card. While he said he is a U.S. citizen and that he was born in California, his Mexican ID card listed him as being from Agua Prieta, Mexico.

The deputy then looked inside the Expedition and located nine illegal immigrants – two of them unaccompanied juveniles ages 14 and 15, along with camouflage clothing and jugs of water. None of the people in the vehicle spoke any English.

The Border Patrol was then called and a Spanish-speaking agent interviewed the driver.

Ramirez allegedly told the Border Patrol agent that he picks up the migrants in Douglas and then transports them to Phoenix. He said he receives $300 for each person he transports and is informed where to drop them off when he gets closer to the Phoenix area. Ramirez said he is pressured to work as a human smuggler by the Mexican Cartel.

The Border Patrol transported the illegal immigrants back to the border for processing, and Ramirez was booked into jail for smuggling. The SUV, which is registered to a female out of Tucson, was impounded in the Graham County Yard.