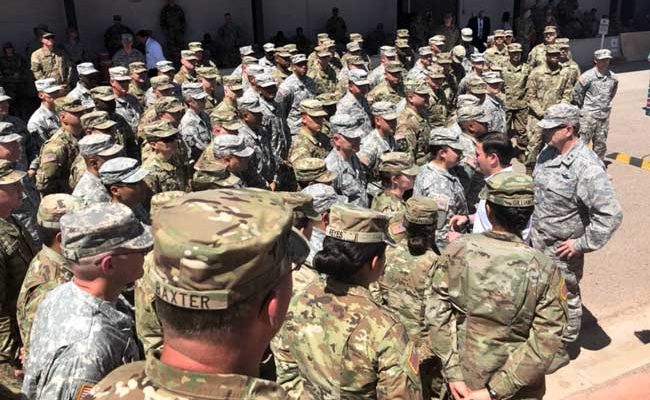 More scheduled to be deployed Tuesday

PHOENIX – Arizona Governor Doug Ducey announced Monday that he has deployed 225 members of the National Guard to the border on par with President Donald Trump’s directive. The National Guard later said an additional 113 troops would be deployed Tuesday.

Trump previously said the military action was needed because “the United States is imperiled by a drastic surge of illegal activity on the southern border.” Trump called for between 2,000 to 4,000 National Guard members to be deployed along the border from Texas to California.

Ducey sent out a Tweet on Monday saying he had updated the situation with sheriffs whose counties are at the border and said additional members would be deployed Tuesday. Reportedly, the federal government is expected to pay for the costs of the deployment.

In a press conference Monday, Ducey told the troops their effort was needed to make Arizona safer.

“Your mission is to support the efforts of the U.S. Department of Homeland Security and their efforts to secure the border, and keep the communities on the border safe,” Ducey said. “Your efforts will make every Arizonan and our country safer.”

Ducey was the first of the four border governors to support Trump’s call. Texas Governor Greg Abbott has also voiced support for the deployment and has sent 250 National Guard members to the border, the first being deployed last Friday.

Ducey met with Arizona’s troops at about 11:30 a.m. at Papago Park Military Reservation in Phoenix and sent them off to the border with a handshake.

Trump said he would like to see the National Guard stay at the border until his border wall is constructed.

“Until we can have a wall and proper security, we are going to be guarding our border with the military,” Trump said.