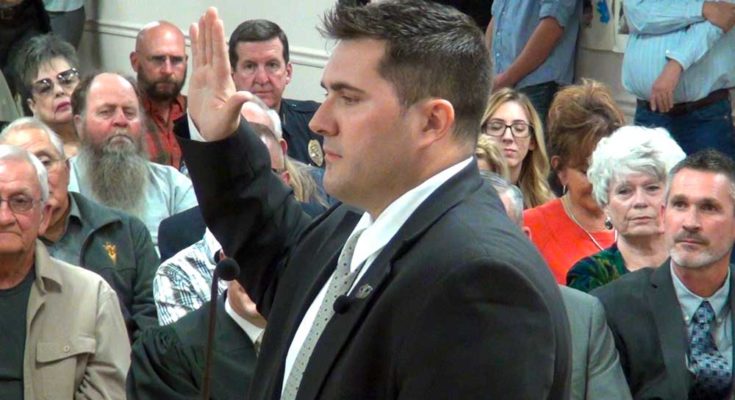 Jon Johnson File Photo/Gila Herald: Safford City Councilor Chris Taylor, shown here taking his oath of office, suffered a concussion Monday after having a ceiling collapse on him during a fire call southeast of Safford.

SAFFORD – Safford City Councilor Chris Taylor is recuperating at his residence after having roughly 300 pounds of soaked drywall ceiling collapse onto his head and neck at a fire call Monday afternoon. Along with serving on the city council, Taylor is also a member of the Safford Volunteer Fire Department.

Taylor was one of the volunteer firefighters to respond to a call of a structure fire in the 400 block of Solomon Road behind Tri-County Materials. Safford Fire was dispatched to the scene at 12:05 p.m., according to Chief Clark Bingham.

The fire reportedly started behind the residence and while the cause is unknown has been deemed as accidental.

The crews arrived at the scene with thick, black smoke billowing and the home’s garage, which was fully engulfed, according to Bingham. The crews managed to knock the fire down in the garage but it had spread to the attic area of the main residence.

“The fire had moved into the house, and the crews were pulling ceiling and putting water on it, and the ceiling came in on firefighter Taylor,” Bingham said.

Ambulance crews are dispatched to every fire call in case they are needed for injured people involved in the fire or for injured firefighters, and Taylor was transported by Lifeline Ambulance to Mt. Graham Regional Medical Center (MGRMC) for evaluation.

Taylor told the Gila Herald that a computed tomography (CT or CAT) scan performed at the hospital came back as normal but that he had suffered a concussion. A CAT scan uses X-Rays and a computer to create pictures of the patient’s organs, bones, and other tissues.

Taylor said he and other firefighters entered the structure to help save the home.

“There was fire up in the attic, so we made a little hole in the ceiling to spray water in and I guess the water got a little too heavy and the whole ceiling in the room just happened to (fall) on top of me,” Taylor said.

He said he was dizzy at the scene and so they transported him to MGRMC, where they administered IV fluids and monitored him for about 3.5 hours. He was released from the hospital at about 4:30 p.m. with a bad headache, little nausea, and a sore neck. Taylor advised he is supposed to do a followup with his primary care physician in two days.

Bingham said the situation could have been worse but, thankfully, it wasn’t due in part to Taylor’s diligence.

“We exercise extreme caution to make sure these type of things don’t happen, but sometimes things happen,” Bingham said. “Luckily for Chris, he’s a well-trained firefighter; he wears all his protective gear (and) wears it properly. It saved him from further injury. He was wearing his gear exactly as it is designed and it performed exactly as it is designed.”

Bingham said the home suffered a “pretty major loss” but that it was rebuildable.

“Things like this happen,” Bingham said. “Luckily he (Taylor) escaped with minor injuries and he should be back up to work tomorrow. These guys work really hard to provide fire service to the community.”