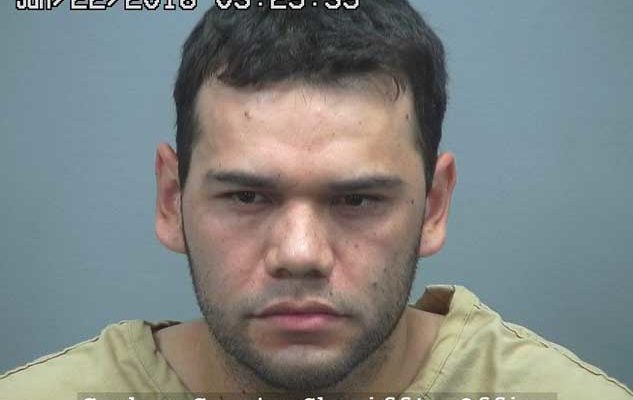 Contributed Photo/Courtesy GCSO: Simon Castro was booked on multiple domestic violence-related charges after allegedly disobeying a court order and breaking into his ex-girlfriend’s apartment and assaulting her.

PIMA – A domestic violence suspect compounded the charges against him when he kicked out the window of the squad car he was placed in after being arrested.

Simon Andrew Castro, 31, was already on intensive probation when he allegedly disobeyed a protection order and broke into the residence of a former girlfriend, Thursday, June 21. A petition to revoke his probation was filed the following day.

The officer responded to 911 calls to the victim’s residence in the 100 East block of 200 South at about 9:49 p.m. and took Castro into custody. The officer was aware of multiple domestic violence incidents in the past regarding Castro and the victim – Castro is still being adjudicated for charges of assault and disorderly conduct filed April 26 – and that the protection order against Castro served May 31 was still valid.

According to the officer’s report, the victim said Castro kicked in the back door of her apartment and then kicked in the door to her bathroom after she locked herself inside in an attempt to escape. During the incident, Castro also allegedly broke the victim’s work cell phone. The officer noted the damage to the doors and splintered pieces of door frames seen on the floor. The victim said Castro had also assaulted her, but she declined medical attention.

While interviewing the victim, the officer suddenly heard a crash outside and came to see Castro had kicked out the patrol vehicle’s window. The Pima officer radioed for backup, and an officer from both the Thatcher and Safford police departments responded, along with Undersheriff Jeff McCormies of the Graham County Sheriff’s Office.

Castro continued to act belligerently by kicking the patrol vehicle until backup arrived. He was then placed into a Thatcher Police vehicle and was transported to the Graham County Adult Detention Facility, where he was booked on two counts of aggravated assault, burglary in the second degree, interfering with judicial proceedings, disorderly conduct, and criminal damage.

While being booked into the jail, Castro allegedly threatened the Pima Police officer and advised him to list as many charges as he could because he “wouldn’t be in jail forever” and insinuated that retribution for arresting him would be made.