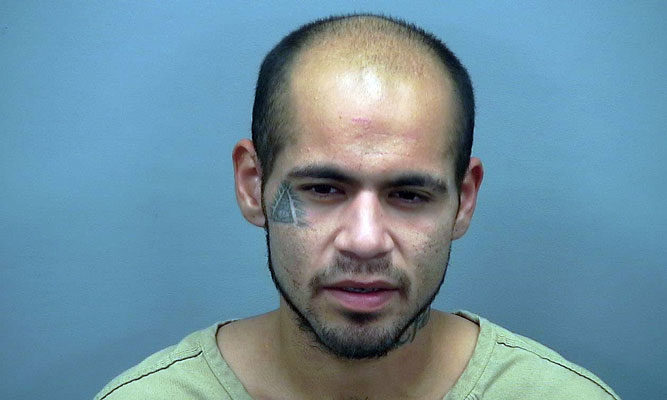 Contributed Photo/Courtesy GCSO: Martin Carrasco, 22, was jailed on charges of disorderly conduct with a deadly weapon, misconduct involving weapons, criminal damage, and a warrant after allegedly slashing the tires on his step-father’s truck as well as causing additional damage.

SAFFORD – A convicted felon with a long conviction record for drug charges was booked into the Graham County Adult Detention Facility on Dec. 29, 2018, after allegedly harassing his step-father with a large knife and damaging the victim’s truck.

Martin Carrasco, 22, was arrested and booked into the jail on an Arizona Game & Fish warrant and new charges of disorderly conduct with a deadly weapon, misconduct involving weapons (for being a prohibited possessor of a deadly weapon) and criminal damage.

According to the victim, he had gone over to his wife’s apartment to retrieve his hat and coat shortly before 8 p.m. when an altercation with Carrasco took place. The victim said he formerly lived at the apartment with his wife and that Carrasco would stay with them from time to time.

However, Carrasco apparently didn’t want the victim to come to the residence as Carrasco attempted to dissuade the victim via text message from showing up. The victim’s wife followed up that text with one of her one telling the victim where his items were and that he could pick them up.

When the victim attempted to pick up his hat and coat, Carrasco allegedly yelled at him to leave and pulled out a folding knife with an approximate 10-inch blade.

The victim then retreated to his truck and Carrasco allegedly followed and used the knife to slash the front and rear driver’s side tires and break both taillights. The victim said Carrasco then continued to slash his knife at the windows of the truck in an apparent attempt to break them.

At that point, the victim pulled out of the area on his two flat tires and onto the street. He said Carrasco then left the area on foot.

Upon arrival, an officer noted the damage to the victim’s truck and located blood splatter on some windows where he believed Carrasco had possibly accidentally cut himself during the melee.

Carrasco was later found by another officer at about 9:45 p.m. in the area of U.S. Highway 70 and 1st Avenue. The officer took Carrasco into custody at gunpoint and removed a large folding knife from him.

The initial officer who took the report arrived and noticed Carrasco’s finger was bandaged and there was blood on his shoe.

After initially advising his intent to remain silent and speak to an attorney, Carrasco allegedly told the officer, “you know he hit me, right?” The officer reported Carrasco confirmed he was speaking about the victim.