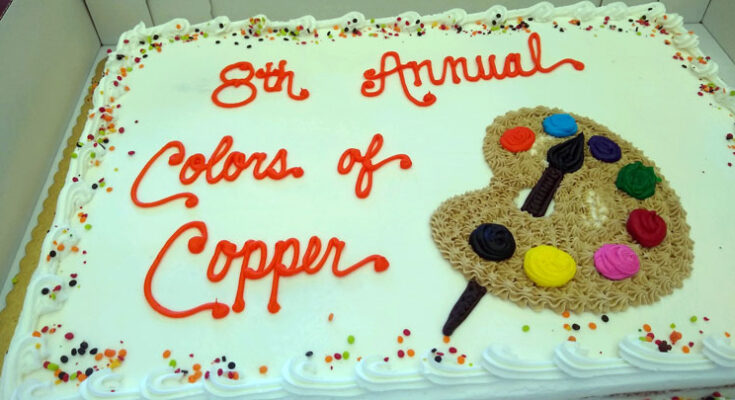 It was the 8th annual “Colors of Copper” grand event in Clifton last weekend. How did it turn out? For one thing, it drew artists from as far away as Santa Fe, New Mexico, and Mexico.

It was the “best ever,” said Clifton’s Barbara Ahmann. She is in her own right an accomplished artist and has participated in all of the Colors of Copper.

The show was in its eighth year. It was held at the Art Depot, a room specifically set aside for art and other cultural at the historic Clifton Train Depot.

On the first day of the show, Saturday, Nov. 6, 168 people attended. The crowd was fairly thin earlier in the day but by 5 p.m. the depot’s parking lot was packed and overflowed into an adjacent parking lot.

Duncan’s Karla Ellis earned the first place award among paintings. The work titled “I thought so” captures the spirit of the west and certainly that of southern Greenlee County and western New Mexico. It showed a cowboy looking at his horse. It was obvious there was a strong bond between the man and animal.

It was also obvious that Ellis knows her subjects and that knowledge was well expressed. Being from Duncan, her strong knowledge and appreciation of people and horses were very obvious. Her painting was of the theme and style that most of the art patrons at the event stopped and looked closely to appreciate.

The Colors of Copper had an international flavor to it in that Raul Navarro of Puerto Vallarta, Mexico, was awarded second prize for his work “The Little One,” a portrait of a small girl. Other artists from Mexico also participated in the show.

Santa Fe artist Robert Anderson placed third with his painting of the San Juan River. His participation was greatly appreciated as Santa Fe is a nationally and globally renowned center for the arts.

A work that stood out strongly among sculptures was one of Kokopelli, a legendary deity of fertility and agriculture among many southwestern Native American tribes. He is seen as being hunchbacked while playing the flute.

The work was done by David Himelfarb. The eight-foot-tall work grabbed the attention of everyone who attended Colors of Copper. Such comments from many patrons were that it was not only tall but was “absolutely beautiful” and “unlike” any version of the deity they had ever seen. Kokopelli is depicted on a great many items ranging from clothing, handbags, smaller sculptures, paintings – and the list goes on.

Second place among sculpture work was earned by Kevin Larson with his work of “Growing a Garden.” Ahmann said his work was definitely “a unique style.” He uses “thrown away” objects, that is, discarded pieces of various items in his work.

Receiving a third-place award was Karen Romero-Ragland. It was titled “End of the Road.” It was described by many as an “incredibly beautiful” work of art. It was a large wooden vase with a lid, perhaps made of native mesquite. It was beautifully decorated with turquoise and copper.

“It was not only gorgeous but really special, made with items native to our southwest,” a woman commented. Patrons standing by her either nodded or voiced their agreement.

In the category of photography, Karen Stephenson was awarded first and second place for “Paired for Life,” which involved ducks and the other award-winning work was titled “Snow Geese.” Ahmann and others said the third-place photo by Alicia Guerra, of Clifton, was their absolute favorite photograph. It involved a photo of the lookout above the giant Freeport McMoran Morenci copper mine. It was done on weathered layers of ore and was printed on metal. One certain unique aspect is that the overlook no longer exists.

The former lookout, which was visited by thousands over the years, was located along U.S. 191. It has been replaced by one located a few miles up the road. Guerra’s photo is also unique in that the mine has been greatly expanded meaning Guerra’s work captures a most interesting and iconic piece of local history.

A delightful part of Colors of Copper is that it also involved wine tasting. An area with a temporary fence barrier was set up outside the Art Depot for patrons to sit, relax and socialize. On Saturday, the area was packed by late afternoon and evening. The wine was made available by the Sonoita vineyard. Patrons made several positive comments about the wine’s taste and regarded it as “mighty darn good,” “very, very tasteful” and “definitely being of quality.”

Colors of Copper was also held on Sunday, Nov. 7, at which 85 patrons attended. Counting both days, 253 people turned out for the annual event.