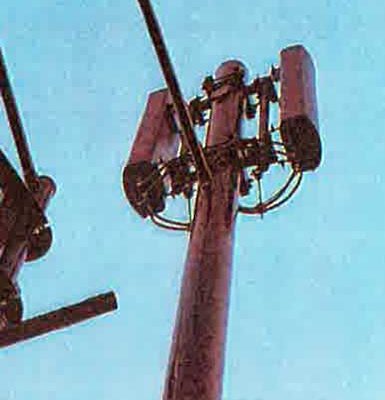 Contributed Photo: The Clifton Planning & Zoning Commission has approved the installation of signal-enhancing devices on existing utility poles such as seen here. The devices will greatly improve the transmission of cell phone and computer signals in Clifton.

CLIFTON – The signals for various electronic devices could be hopefully improved in Clifton due to a change in a town ordinance. The change was approved at a Feb. 13 town Planning & Zoning Commission meeting.

The change allows companies such as those that provide cell phone and computer services to place their signal-enhancing devices atop existing power poles that are located in the town’s right-of-way.

Clifton Town Manager Ian McGaughey said one strong reason for the ordinance change is there are “dead spots” in this town situated in the San Francisco River and Chase Creek canyons. Some of those spots located in the river canyon are flanked by high and steep cliffs. He also said the ordinance does not allow new poles to be erected. “We don’t need more poles,” he said. “This is a beautiful, historic  town and we don’t need the clutter of more utility poles.”

On the plus side, McGaughey said the new ordinance will allow a much faster “5G” signal that will speed up signals, particularly for computer use. At present only a 4G signal is available.

“There will be a major difference with the availability of an enhanced signal,” McGaughey said.

McGaughey said town officials have met with representatives of companies that provide cell phone and computer signal services to Clifton. He said the meetings were “quite productive.”

About 95% of all utility poles within the Clifton town limits belong to Morenci Water & Electric. Companies hoping to utilize the poles will have to enter into some type of agreement with MW&E. Although a vast majority of utility poles belong to the power company, the town will be charging a $750 application fee and a $50 yearly payment for each pole signal-providing companies use.  How many poles companies will seek to use is yet unknown. The town owns only six or 10 poles.

McGaughey informed the commission that MW&E will be installing new utility poles on the road leading to the Clifton RV Park. Their purpose will involve the monitoring and function of a water well along the San Francisco River. The well is among those which provide water to Clifton residents.

Should signal boosters be placed atop some of those poles, McGaughey said it will probably be beneficial to those staying in the RV park, which is located along the river and in a very narrow steep canyon.

The next step in the ordinance change is the town council either approving or disapproving it. The council holds its regular monthly meeting the second Thursday, 7 p.m., at Clifton Town Hall. The meeting is open to the public and agenda are available at least 24 hours before the meeting.

Although the Feb. 13 Planning & Zoning meeting was advertised and posted in various public locations, no one from the public attended the meeting.