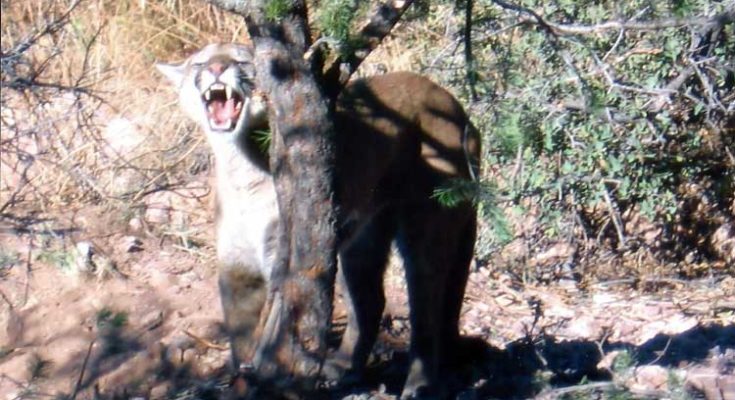 The 2018 “Arizonans for Wildlife” ballot initiative making the rounds seeks to do away with the state wildlife agency’s authority to allow controlled mt. lion hunting or the controlled hunting and trapping of bobcats. Neither species, it should be noted are in any way threatened or endangered. Populations of both in Arizona are and have been, robust under the purview of the Arizona Game and Fish Department (AZGFD).

The “Arizonans for Wildlife” endorsements include the Oceanic Preservation Society and the Wildlife Rehabilitation Center of Northern Utah who obviously aren’t Arizonans at all. Their main financial backer is the recently (and often) disgraced Humane Society of the United States (HSUS). The leader of that money-generating group, Wayne Pacelle, and his right-hand man resigned the first week of February 2018 under a cloud of sexual abuse and harassment allegations. Lovely people.

The “Arizonans for Wildlife” group proclaims they want to protect “jaguars, mountain lions, ocelots, bobcats, and lynx from “trophy hunting and trapping”. Canadian lynx, of course, doesn’t even exist in the wild in Arizona; jaguars and ocelots are incidental species in our state and are already completely protected under both state and federal Endangered Species laws. By linking the words “trophy” to “hunting” the ballot measure pushers are trying to strike an emotional differentiation from “subsistence” or wild meat harvesting (deer, elk, turkey, etc). But make no mistake; they will eventually get around to trying to ban that too.

Mountain lions have one of the largest ranges of any major carnivore, from Canada almost to the southern tip of South America. They may be found from Arizona’s deserts to the pinnacles of our highest mountains. As with any top predator, they sometimes kill and eat people. Fortunately, most of their attacks on humans, as with much of their large prey, are not fatal (fight back, you may win!) although just being bitten by those big canine fangs and clawed by the meat hooks on the front paws always leaves some serious wounds. Luckily, perhaps due to the chemical flavor found in human flesh, there aren’t more of these predatory assaults.

Multiple mountain lion attacks on people, many of them children, from California through Arizona and into New Mexico, form a U-shape on an incident map which can be seen on the Internet. So far, fatalities, where lions have killed and eaten people, have only occurred in the states on either side of us. Since California banned mountain lion hunting and New Mexico once curtailed a program of thinning lion populations, it has been speculated that the fatalities were due to the big cats losing any fear of us. Read the informative books “Cougar Attacks” by Kathy Etling and “Cat Attacks” by Jo Deurbrouck and Dean Miller and decide for yourself.

Bobcat trapping, or that of any other species, is a hot-button subject for anyone not closely attuned to all facets of it. There are a lot of myths and misinformation attributed to what is actually an important but fading tradition and true American art, due to most Americans being so completely out of tune with the natural world. The International Association of Fish and Wildlife Agencies, along with CITES (Convention on International Trade in Endangered Species) and state wildlife organizations like that in Arizona, monitor, regulate, and closely control the harvesting of fur ( a renewable resource unlike “fake fur” made from petroleum products).

All bobcats collected through hunting or trapping must have a plastic CITES tag to tan, sell, or transport the pelt across state lines. These cost $3 each from the AZGFD and a required report showing date, management unit, method of taking, and sex of the animal has to be turned in before getting the tag. The lower jaw of the animal must also be provided at this time so a tooth may be pulled and the age of the bobcat determined. This information is studied by a professional biologist to help determine bobcat population health and numbers. All of this is only possible because of licensed trappers and predator callers.

None of the listed endorsements for the “Arizonans for Wildlife” who are touting this ballot initiative include people who actually benefit necessary wildlife management. They don’t’ buy the firearms, ammunition, bows, arrows, and other hunting equipment that provides an 11 percent excise tax under the Pittman-Robertson Act. These funds ($18 billion so far) go to the Department of Interior, which then doles it out to state wildlife agencies. Nor do these people give money directly to the AZGFD through the purchase of licenses and permits as hunters and trappers do.

Extreme animal activists like those behind “Arizonans for Wildlife” use wildlife resources as emotional pawns to earn themselves money and push total non-hunting/trapping/fishing agendas. They may gather the 150,642 signatures needed to get the measure on the 2018 ballot through lies and misconceptions. If this happens, all real Arizonans will need to reject it.

Dexter K. Oliver has been a Southwest threatened and endangered species specialist for private, state, and federal wildlife agencies, as well as a licensed hunter, trapper, and fisherman. He lives in Duncan.