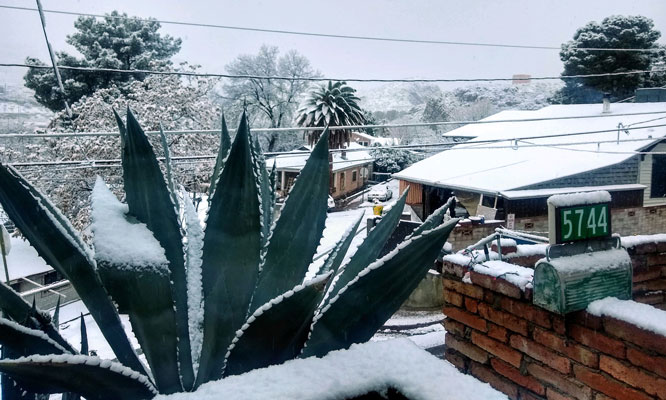 Photo By Susan Breen: A century plant in a South Clifton yard is graced with snow on Tuesday morning, Jan. 26. In the background are snow-covered rooftops. It was a wet, heavy snowfall.

CLIFTON – It is the first time in a few years that Clifton has come closest to having a winter wonderland. The surrounding hills and steep canyon walls were covered with a heavy blanket of snow Tuesday morning, Jan. 26.

Limbs on the leafless trees made for an interesting spectacle. The snow-covered roofs of houses and cars on the street revealed that quite a bit of snow had fallen.

It was a beautiful and welcome sight after having experienced the summer of 2020 with its record heat and the continuing drought in Arizona.

What made it particularly enjoyable for myself and my wife who live in South Clifton, was to stand in our front yard or sit on our front porch and enjoy the sight of white that blanketed Clifton. What stood out in our yard were a bare-limbed peach tree and cacti – a huge century plant, and a saguaro, all trimmed in white.

What appealed most to us is that I did not have to go out and about as I had during my youth while living in Colorado. When I think of snow and cold what often comes to mind are the freezing cold early mornings in the high altitude of his native San Luis Valley. It was quite common for the temperature at sunrise to be 30 or 40 degrees below zero.

I will never forget the morning in Alamosa in November 1979 when the temperature sank to 64 below zero. Ouch!

In Clifton, on this Tuesday morning, it was 32 degrees. That is the point at which water freezes but with my Colorado experiences I thought 32 was mild. Very mild. Wearing a wool sweater and a heavy coat made it quite comfortable for me to sit on my porch and have a good hot cup of coffee while checking out the scenery.

A thought went back to the previous night, Monday, in Morenci. I and my wife had walked from our hangout near the Starbucks coffee shop to the Bashas’ grocery store, a distance of about 300 yards. We walked there in light rain.

After doing some shopping, we headed back to our hangout where our cars were parked. Upon leaving the Basha’s portico that provides protection from the elements, summer sun, and rain, we were immediately hit by a heavy, wet, and blinding snowfall. We had difficulty seeing as we crossed a parking lot by the Morenci club. About 50 yards on we stopped for shelter in the adjacent library’s portico. I was wearing a hooded sweatshirt and the portico’s lights revealed my chest was covered with heavy, wet snow.

With grocery bags in hand, we dashed to our respective cars. Both vehicles were covered with snow.

My hands were freezing cold. I only had a thin pair of gloves and they were soaking wet. When I entered my car, I turned its heater on high and placed my hands over the heat vents. My hands were so cold and numb I could not so much as manage moving a steering wheel. It took about 15 minutes for my hands to sufficiently warm up enough to drive.

My wife had much warmer gloves and later said she had no problems. Her hands were plenty warm.

On my way home, I thought of how and why I have repeatedly said how I hate snow. It can be the source of much misery if a person is not adequately prepared for it. Even when a person is prepared it can still be miserable. I recalled having to drive in blinding snowstorms in Colorado. I most remembered digging a four-foot deep trench to accommodate waterpipes at my mother’s home. They had been in a three-foot deep trench and had frozen solid.

At the time, the temperature in the Valley did not rise above 0 degrees for more than a month. Digging in the frozen ground was absolutely miserable, but necessary.

Coming out of Morenci on Monday night, the snowfall was heavy but let up completely as I drove down the hill to Clifton situated 4,000 feet lower in elevation than Morenci. Upon arriving in Clifton and judging by the pools of water on the highway, I saw there had only been heavy rain. Great. No snow, I thought.

I was grateful as I and my wife sat down for supper in our warm home. That was followed by a nice warm bed and a good night’s sleep.

I did not wake up until about 8:30 Tuesday morning. The first thing my wife said to me was that it had snowed and everything looked so beautiful. I thought to himself “Bah, humbug” or something like that.

Upon opening the front door, I was struck by the scene. It was in fact beautiful. I stood on the porch, coffee cup in hand, and admitted to myself, ‘Yesiree, everything does look mighty beautiful.’

It was a winter wonderland.

That, and the fact I did not have to be out working or driving in it and knowing I could retreat into a cozy warm home any time I chose to, made everything all the more special.