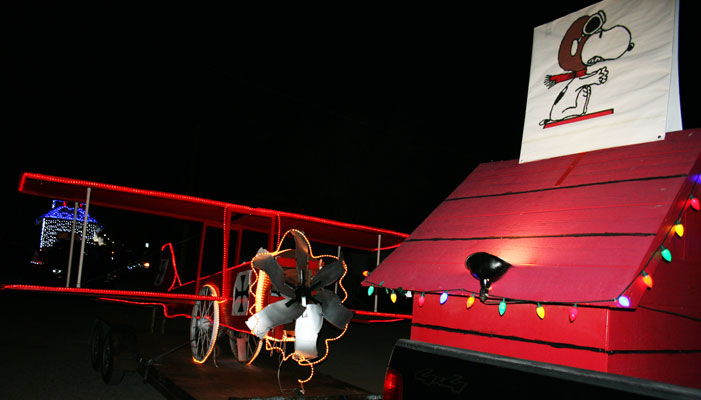 Walt Mares File Photo/Gila Herald: Snoopy is trying to outfly the Red Baron in this file photo from a previous Clifton Festival of Lights. The parade entry took a great deal of effort to put together and was worth the effort as the crowds lining historic Chase Creek cheered their strong approval. The 2022 version of the festival is Saturday, Dec. 3.

Will feature a parade, vendors

CLIFTON – Raining on the parade. It’s often only a figure of speech regarding disappointment in something. But then again rain actually falling on a long-planned and anticipated event can be what some would term as being a real bummer.

Although rain is predicted on Saturday, Dec. 3, the town of Clifton is not postponing or canceling its biggest event of the year. Town officials confirmed Thursday that the 26th annual Festival of Lights will be held this Saturday come rain or shine.

The festival begins at noon and will run into the night.

Spectators are encouraged to wear warm clothes, and perhaps carry rain gear in case the sky darkens and clouds unload some of the wet stuff. Clifton resident R.T. Jackson, who closely monitors weather predictions made by the U.S. Weather Service, said on Thursday that the possibility is strong for rain in Clifton.

It’s not that unusual for rain to fall on the event. It has happened twice before and festivals were still a success.

The parade of lights begins at sundown, and it will again be held on historic Chase Creek. This year there will be something of a different twist that will be an improvement. Some of the parade routes will be illuminated with antique-looking streetlights. That should help spectators negotiate sidewalks, some of which are deteriorated or high above the street.

A big part of the festival includes vendors, especially those selling food. Among them will be hamburgers provided by the Morenci Lions Club and the Greenlee County Democratic Party which will offer churros, coffee, and hot chocolate.

There will also be vendors selling costume jewelry, toys, and a wide variety of other goods.

Those attending the festival are reminded that vehicle parking is always at a premium. In the past vehicles are parked along the highway running by the festival site. Parking is also available at the nearby American Legion headquarters and the Clifton Train Depot.