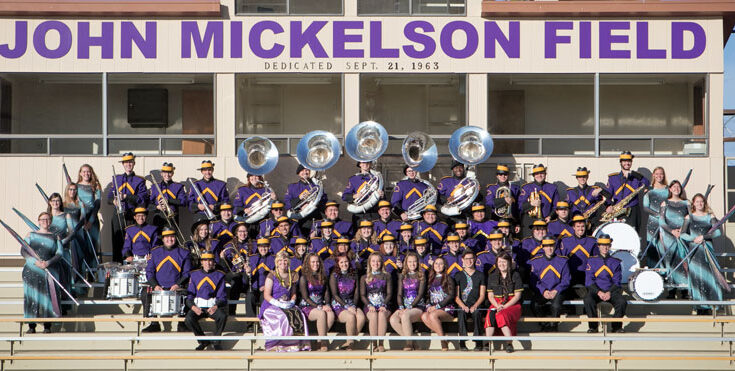 EAC Photo: The Eastern Arizona College Marching Band will perform at the Pearl Harbor Memorial Parade to honor the servicemen and civilians who died during the attack on Dec. 7, 1941.

THATCHER — The Eastern Arizona College Marching Band has been selected by the Pearl Harbor Memorial Committee, a partnership including The National Park Service and The History Channel, to represent the state of Arizona at the Pearl Harbor Memorial Parade next week. During their visit, the band will also give a tribute performance on the deck of the USS Missouri and at the Polynesian Cultural Center.

Under the direction of Geoff DeSpain, the 20-student band will march in the annual parade in Oahu, Hawaii, commemorating the 81st anniversary of the Japanese attack on Pearl Harbor. The marching band’s performance this year paves the way for a featured performance during next year’s parade.

“We are incredibly honored to represent EAC and the entire state of Arizona,” said DeSpain, EAC professor of music. “The music we play will provide a meaningful tribute to our veterans, the armed forces, and this historical event.”

Founded before Arizona was made a state, EAC’s marching band carries on a long tradition of music at EAC. Shortly after EAC was chartered in 1888, a small group of musicians came together to form the band. Although the exact year the band was founded is unknown, it has been performing for over 100 years.

“We are the only community college marching band in the state of Arizona. Our members come from all over the country and find an immediate family with the band. Students feel comfortable here and they make long-lasting friendships.”

Though they are performing, the band members will also learn on this trip. They will speak with survivors at the USS Arizona Memorial, built over the remains of the battleship USS Arizona, the final resting place for most of the 1,117 military personnel killed on Dec. 7, 1941.

“As our students perform, they will particularly remember the USS Arizona’s 21-member band who perished when Pearl Harbor was attacked 81 years ago. The USS Arizona band was warming up to play the national anthem at 8 o’clock sharp that day. They didn’t get to play a note because the attack began before the colors could be posted.”

Over the past two years, the EAC Marching Band came into prominence with two consecutive invitations to perform the Star-Spangled Banner for the 2020 and 2022 opening sessions of the Arizona State Legislature. In addition, the band recently appeared live on ABC 15’s early morning show as EAC President Todd Haynie discussed the importance of Arizona’s community colleges.