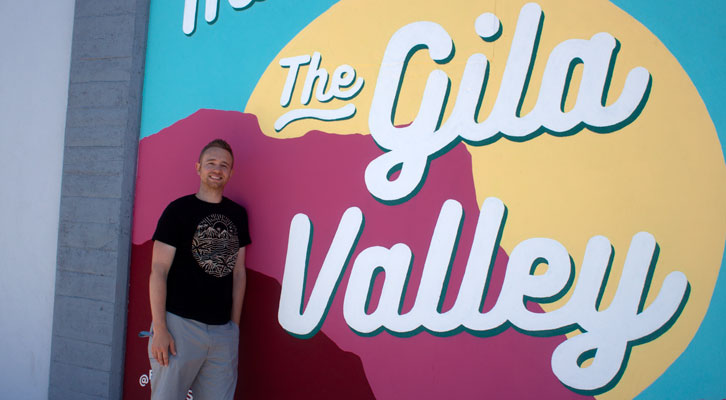 Jon Johnson Photo/Gila Herald: Local artist Brandt Woods stands in front of his latest mural in Downtown Safford for the Gila Valley Made store. Woods said he would like to paint more murals to grab the attention of highway traffic and bring them into Downtown.

SAFFORD – The revitalization of Downtown Safford with new businesses and amenities continues through the hard work of many, including those who help beautify the physical structures.

Brandt Woods is one such artist, who is painting his art on some of the biggest canvasses.

Some of his artwork Downtown can be seen on the side of Richard’s Music off Fifth Avenue, which sports a cactus guitar, and, most recently, a section of wall on Gila Valley Made’s new location on Main Street and 6th Avenue. He has proposed more art for that building as well and said he envisions creating interactive murals that would catch the eyes of U.S. Highway 70 travelers and lure them into stopping in Downtown Safford.

“It would be cool to have an “Insta” mural wall, basically some wall with really beautiful paintings that people want to come off the highway and take a picture of,” Woods said. “I think that would actually bring a lot of business off the highway, which would be great for all the businesses here . . .”

He said it is also important to match the business or building owners’ vision for their property as well. While he said he is not a huge fan of Southwest-inspired works, he said some Downtown building owners, for example, requested the mural match the area.

“We’ll do Southwest, but I’m going to update the colors,” Woods said. He then came up with making a saguaro cactus into a guitar. For the Gila Valley Made mural, watch a video here of Woods showing how he accomplished it.

Woods told the Gila Herald that he has always enjoyed drawing but it wasn’t until he was in college studying psychology when he found himself spending all his free time in the art studio.

“Eventually, I just switched over and found myself thinking about art all the time,” Woods said.

Finding his true calling, Woods began drawing comics on a regular basis and has painted on a variety of mediums, including traditional artwork and the not-so-traditional, such as painting 31 customized skateboards. Most recently, an opportunity opened up for showcasing his art Downtown.

Working with business and building owners Downtown, Woods has painted two outside murals and is set to create a wall painting for local attorney J.J. Waite, who is remodeling the Spencer W. Kimball building which houses Holladay’s Photo Emporium as well as other offices. Woods said Waite and Graham County Board of Supervisors Chairman/Safford Downtown Association President Danny Smith were integral in assisting his efforts in painting murals Downtown. The pandemic appeared to shutter some of Woods’ plans, but now as restrictions are lifted, he is getting the green light to bring some color back to Downtown.

The organizer of that contest, spray paint artist Joe Roaneagle, has also shared his gift with a Downtown barbershop for its sign and completed the full-building spray paint mural on the Bull Pen bar on U.S. Highway 70.

“Everyone seems much more open to art right now,” Woods said. “So, I’m going to take advantage of that while everybody is cool with it . . . I’m doing my best to add more color to Downtown if they’ll let me.”

Woods said he is in talks to paint some more.

“My main goal (for Downtown murals) is to bring business or (increase) property value,” Woods said. “I don’t want to put a painting on that devalues the building, so I need to work with the business owners (to) make something that they like that brings attention to their business. It’s a slow process. I have a few (who) I want to talk to but nothing is concrete yet.”

For those who are interested in contacting Woods regarding murals or other art projects, he advised the best way is through his social media accounts @BrandtWoods, including his Instagram and Facebook.

“Let’s put more color on Downtown,” Woods said. “That’s what I want to do.”