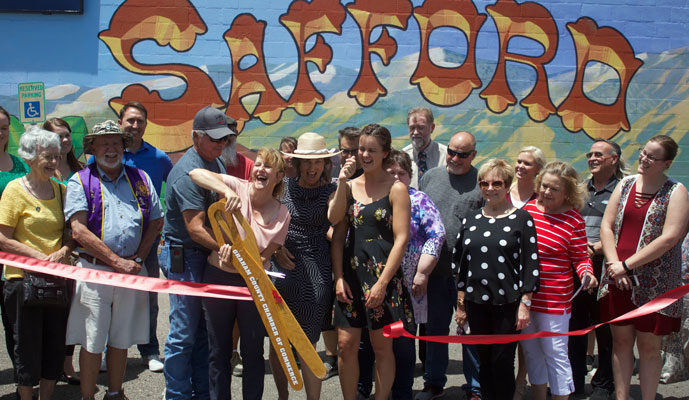 SAFFORD – What once was a drab and boring ordinary wall has been transformed into a colorful backdrop that is “Instagram-worthy”, according to Graham County Supervisor/Safford Downtown Association President Danny Smith.

“It looks like a postcard because this one and the next one will certainly be Instagramable,” Smith said. “(It is) where people can take photos in front of it and say ‘look at us in Safford.’

On Wednesday, local movers and shakers joined the artists and Graham County Chamber of Commerce in a ribbon-cutting celebration announcing the completion of the Downtown Safford mural on the Farmers Insurance building at 610 W. Main St.

Owner Michelle Wilson had the honors of cutting the tape and said she was going to miss the artists who she had become accustomed to seeing painting her building.

The mural was designed and painted by Tucson artist Amy Novelli with assistance from former Safford resident Michaela Dannenbrink, who works with Novelli at the Arizona Theatre Company in Tucson.

“I’m actually going to miss Amy and Michaela when they’re gone because it’s been nice just kind of just getting to hang out with them and actually watching this in progress,” Wilson said. “It’s beautiful and it’s wonderful. And, actually, just to kind of add to it, in the crowd down at the bottom here she actually added by grandkids . . . So, it’s going to be a memory that I’m going to have for the rest of my life.”

Novelli was chosen after the Safford Downtown Association (SDA) put out a request for qualifications for an artist. The total budget of the project was $5,000, with money donated by the Freeport McMoRan Community Investment Foundation.

The mural shows off Downtown buildings, Mount Graham, the three big C’s – copper, cotton, and cattle, locals, and three young women astride horses that could represent parades down Main Street. The mural took the artists roughly 70 work hours to complete over several weeks.

“It was super fun,” Novelli said. “I was having coffee and lunch at Ginaveve’s, and breakfast and lunch at the Main Street Cafe . . . It was really fun hanging around Downtown.”

Smith said while the choice between artists was a tough one, he was extremely satisfied with the end product.

“We certainly made the best choice for our first mural,” Smith said. “Amy is super talented. You can see Amy’s murals and artwork in Ohio, Pennsylvania, Wyoming, Tucson, Lake Havasu (and elsewhere) around the country.”

Smith said the mural has been so successful that other murals are already planned and other art projects may pop up Downtown as well, including possibly painted the electric boxes. He said the next mural will be self-funded by the SDA and designed and painted by Eastern Arizona College art students. It will go up on the Souder Miller building a block away at the northwest corner of Main Street and 5th Avenue.

Safford City Manager Horatio Skeete said he was impressed with the mural and is looking forward to more art popping up Downtown.

“It’s fantastic,” Skeete said. “We need a couple more. The concrete wall on the other block is interesting in itself and that could be incorporated in something pretty unique.”

Smith added that businesses that want to put up murals on their buildings Downtown do not need permission from the SDA and he would love to see others go up on their own.

Dannenbrink said after her experience with Novelli on her first mural she believes she is ready to take on a project by herself. She said her favorite part of the mural was painting the cows.

“I came out here a couple of days while she (Novelli) was working in Phoenix and I worked on the cows those days,” Dannenbrink said. “It was really fun.”

Novelli thanked Ace Hardware and CMI for their contributions to the project as well as the Dannenbrink family for helping out with the painting.