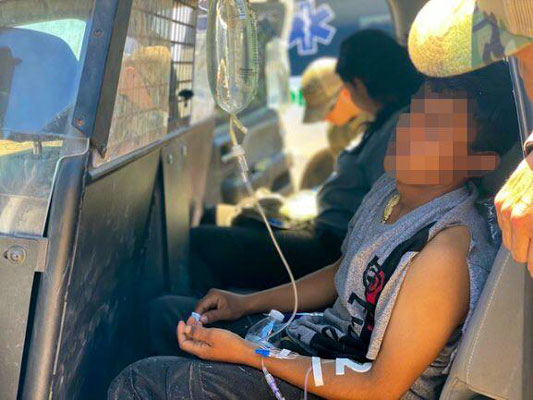 YUMA – Yuma Sector Border Patrol agents rescued several migrants over the weekend who found themselves lost in the Sonoran Desert and out of water.

On Friday evening, Wellton agents were contacted by C5, Mexico’s version of 911, about a call they received regarding three subjects who needed assistance in the desert. Agents responded to the grid coordinates provided through the 911 call and found two subjects approximately 35 miles southeast of Tacna, Arizona. One of the subjects, a 23-year-old male from Mexico, needed immediate life-saving medical attention and an AeroCare life flight was requested. The other migrant, a 31-year-old male from Honduras, was in good health. AeroCare transported the Mexican male to a Phoenix-area hospital where he is still receiving care.

While responding to the 911 call, agents spotted smoke from a fire approximately five miles from the location where they found the initial two and discovered a third subject from the group. An agent who is also certified as an Emergency Medical Technician evaluated the subject and treated him for dehydration. The 22-year-old male, who is from Honduras, was transported to Wellton and later to Yuma Regional Medical Center for further treatment.

Early the next morning, two additional migrants from the same group were located further south near the border. One of the migrants had been the 911 caller from the day before. The two Mexican men, 24 and 35 years old respectively, were evaluated by an EMT and found to be in good health. They were transported to Wellton for further processing.

On Saturday evening, the Yuma County Sheriff’s Office notified the Wellton station of a 911 call they received from four subjects in distress in the desert approximately 20 miles southeast of Dateland, Arizona. Agents found three members of the group in the area and provided them with much-needed water. They were found to be in good health and transported to Wellton. A fourth subject from the group has not been located.

Just over 12 hours later, the Wellton station received yet another 911 call regarding two migrants who were lost in the desert and in distress. Agents requested assistance in locating the pair from the Yuma Air Branch; however, a pilot was not available. An air unit from the Arizona Department of Public Safety responded, as well as the Yuma Sector’s Border Search, Trauma, and Rescue team. Agents located the pair and found them to be conscious but severely dehydrated.

From Friday through Sunday, Yuma Sector Border Patrol agents received a total of 10 calls for help and rescued a total of 25 subjects, most of whom were simply lost. Five individuals have not yet been located.