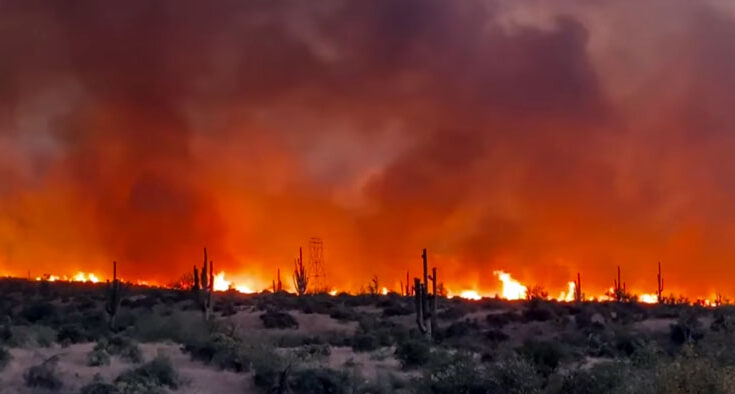 Contributed Photo: The Telegraph Fire has burned more than 40,000 acres and is threatening the communities near Miami, Arizona.

Update: An evacuation order has been issued for the Boyce Thompson Arboretum

GILA AND PINAL COUNTIES – The Mescal Fire and Telegraph Fire, which have prompted evacuations, have both eclipsed 50,000 acres in size as of infrared flights performed Sunday night.

The Mescal Fire was listed at 52,887 acres as of late Sunday night, with 8% containment, according to a briefing by Operations Section Chief Marcus Cornwell.

Firing operations were performed along U.S. Highway 70 on Sunday night and will perform more burnouts and perhaps aerial ignition operations

To the south, firing operations were performed all the way to the Gila River to the east of San Carlos Lake. The fire is burning toward a scar from the Rockhouse Fire from last Fall.

Heavy smoke is expected in the Globe/Miami area and will push northeast into the Peridot/San Carlos area before eventually making its way into the Gila Valley and Morenci/Clifton area. N-95 masks for smoke-sensitive residents are available at the Miami Police Department at 740 W. Sullivan St. in Miami.

The Mescal Fire began June 1 roughly 12 miles southeast of Globe and has grown in all directions. The cause of the fire is under investigation.

A total of 672 personnel were assigned to the fire as of Monday. U.S. Highway 70 is closed to heavy (semis) traffic, but it is open to light traffic, routed on a detour around the fire.

Previously, a “SET” notification was issued for the following:

Previously, residents of Top-of-the-World between Superior and Miami were told to evacuate as the fire was less than a mile from residences. The town of Superior has also previously been given a “SET” notice from the Pinal County Sheriff’s Office.

The fire began June 4 near Top-of-the-World and is listed as being human-caused but still under investigation.

As of Monday, the Telegraph Fire was listed at 56,600 acres.

The Red Cross has moved its evacuation shelter from Miami to Globe at High Desert Middle School, 4000 High Desert Dr. in Globe. Another shelter is located in Mesa, at Skyline High School.