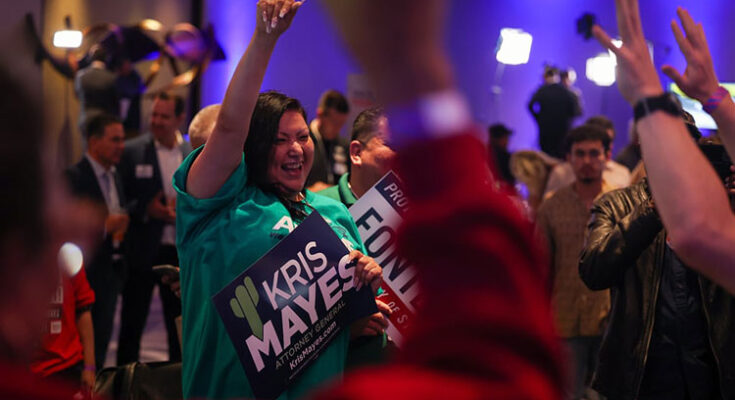 Photo By Mary Grace/Cronkite News: Laura Alvarado dances at the Democratic watch party Tuesday night in Phoenix. Early returns showed many Democrats ahead, but those leads have narrowed or flipped as more ballots have been counted – and many races are too close to call.

PHOENIX – Arizona politics took on a blue hue Tuesday night, but as the sun rose Wednesday, tallies were looking more red instead.

Democrats in statewide races jumped to hefty leads in initial vote counts on election night. But their margins narrowed sharply over the next 24 hours, putting them once again in nail-biting territory by Wednesday evening.

For Republicans who feared Arizona’s projected red wave was faltering, hope sprang anew with many races still too close to call.

Bill Scheel, an Arizona political consultant, forecast that final results wouldn’t arrive until Thursday or Friday – or even next week in the governor’s contest and some other key races.

“In Arizona, we definitely saw a blue mirage last night with (gubernatorial candidate) Katie Hobbs and a lot of Democrats way out in front. We saw that disappear to a large extent overnight,” Scheel said.

As it has done so many times, Arizona bucked what happened elsewhere in the nation. Although some major news outlets and pundits had predicted a red wave across the country of dissatisfied voters voting Republican amid high inflation, it turned out to be only a ripple. That left Republicans clinging to the hope Arizona could help salvage their election hopes.

“I think we’ve seen a fairly standard midterm election where Republicans should have done well being the party out of power,” Scheel said. “But, in fact, we’ve seen Democrats (nationwide) really hold up well.”

Or at least so far. The change appeared to have something to do with voting patterns.

Many Democrat voters appeared to have cast mail-in ballots or otherwise voted ahead of Election Day. Republicans, who raised doubts about election security, may have made a greater effort to vote in person at the polls. Then it became a matter of which ballots were counted first.

In Maricopa, Arizona’s most populous county, the first results released at 8 p.m. on election night were to include most early ballots that were received and verified by 5 p.m. Saturday, Nov. 5. Early ballots received after Nov. 5 were included in the results of Election Day votes, which were released that night and beyond, 3TV/CBS 5 reported. Updates are provided once a day until all votes are counted.

“As we saw after the first ballot drop at 8 p.m.,” said Douglas Cole, chief officer for Highground Public Affairs, a political consultancy, and lobbying firm, “it was heavily Democratic across the state. And as the evening progressed, they started releasing the day-of voter tabulations. That changed the tide. It started switching to the Republicans.”

The voting patterns mark a sharp contrast from the past, he said. Before then-President Donald Trump blasted mail-in ballots and alleged the 2020 presidential election was stolen, Republicans often voted early by mail, and Democrats were known to show up to vote in person, Cole said.

The changing tide of results might reflect as well where candidates drew most of their support.

“That in the long run probably bodes well for Democrats,” Scheel said.

And there are shifting factions.

Republicans have been targeting Latinos, once a dependable part of the Democrats’ coalition.

Although Democrats and Republicans might think it’s easy to claim Latino support, one expert says Latinos remain a toss-up.

“We feel forgotten by candidates,” said Reyna Montoya, founder, and CEO of the nonprofit group Aliento. “Regardless of the party affiliation, they don’t have a really robust understanding of the Latino community and they don’t really care to listen. They come at the last minute either two weeks before the election or try to do a Latino outreach table.”

Early problems with voting in Maricopa County certainly didn’t help calm the political waters. Because of a printer problem, vote tabulators weren’t working in 60 voting centers, although the problem was mostly corrected later in the day. This prompted Republicans to seek to extend voting hours, a move denied by a Maricopa County judge.

Republicans in the state’s two highest-profile races, gubernatorial hopeful Kari Lake and U.S. Senate candidate Blake Masters, were part of the motion to extend voting hours in the county. They took to their respective Twitter accounts to urge voters to stay in line at voting centers. Lake gained national attention for contending the 2020 election was stolen from Trump, who endorsed her campaign. Masters, too, was endorsed by Trump.

At a Tuesday night gathering that Republicans had hoped would be a victory party, Lake expressed frustration but reassured the crowd that each vote would be counted and Arizona would turn solid red once more with this midterm election.