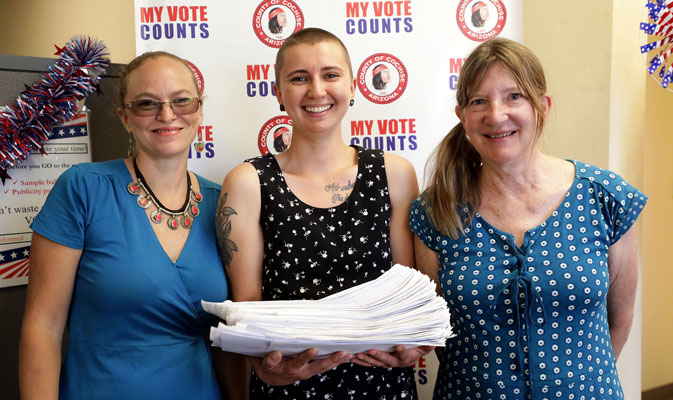 Contributed Photo: The Arizona Water Defenders, from left, Rebekah Wilce AWD Treasurer, Ashley Dahlke, AWD Chair, and Mary Ann Capehart, AWD research coordinator drop off more than 2,240 signatures to get the AMA for the Douglas Basin on the ballot; 1,346 signatures were required.

BISBEE – The Arizona Water Defenders (AWD) submitted a petition to Cochise County Elections today for a November 2022 ballot measure to create an Active Management Area (AMA) for the Douglas Groundwater Basin. The number of petition signatures submitted exceeds the required ten percent of registered voters living within the basin.

The 1980 Groundwater Management Act allows residents of a community to initiate these groundwater protections themselves at the ballot. On March 18, AWD submitted a petition for a Willcox Basin AMA, marking the first time in the state’s history when that had been done. Cochise County Elections has validated those signatures, and the measure to create a Willcox Basin AMA will be on the ballot this November.

“The Arizona Legislature continues to do nothing to protect finite rural groundwater, so the only way voters can preserve their groundwater supplies is to establish an Active Management Area in the Douglas Groundwater Basin. This new AMA would protect homeowners, businesses, industries, and agriculture through conservation, permits for new large wells, and safeguards for small domestic wells. It’s a critical moment for the Douglas area and the time to act has arrived,” says Kathleen Ferris, one of the architects of the 1980 Groundwater Management Act and one of the first directors of the Arizona Department of Water Resources (ADWR).

Arizona has five AMAs in other parts of the state. Part of the Douglas Basin was designated an Irrigation Non-Expansion Area (INA) in 1980, but that has proved inadequate to prevent the overdraft of groundwater by the high-capacity pumps typically used in agricultural operations. The median drop in groundwater levels in the basin was one to three feet a year from 2009 to 2019, according to the Arizona Water Blueprint from the Kyl Center for Water Policy at Morrison Institute at Arizona State University.

Rebekah Wilce, who lives in the Elfrida area and serves as AWD’s treasurer, said that small farmers and other residents have been affected by dropping groundwater levels. “People are struggling. Their wells are running dry, and it’s expensive to drill deeper,” Wilce said. “Some have to resort to hauling water, which can be a real hardship.”

Overpumping in the area is also causing land subsidence at among the highest rates in the state, according to ADWR, leading to earth fissures opening across private property and roadways. Inside the Douglas INA, the land subsidence rate in the Elfrida area was greater than 2.8 inches a year, according to ADWR’s latest subsidence rate maps, while regions of the Willcox Basin have subsided at a rate of as much as 9.8 inches a year.

Mary Ann Capehart, AWD Research Coordinator, said, “Are massive corporate farms really in keeping with the rural character of our county? We need to think carefully about the impact of agricultural operations that use millions of gallons of water a day, draining our aquifer and threatening access to well water for all but the most affluent in the Sulphur Springs Valley.”

“More than 2,000 people signed the Douglas Basin AMA petition because they know our groundwater needs better protection from overpumping,” said Ashley Dahlke, AWD Chair. “Voting for the Willcox and Douglas AMAs is a positive step toward a stable water supply for the long term.”

AWD submitted over 2,240 signatures, and 1,346 are required. Cochise County Elections is working to validate signatures in the next few weeks. Once validated, the Elections Department will notify the Board of Supervisors, and the measure to create an AMA for the Douglas Basin will be placed on the November ballot.

About the Arizona Water Defenders

The Arizona Water Defenders (arizonawaterdefenders.com) is a grassroots community group composed of residents of the Willcox and Douglas Groundwater Basins that works to preserve groundwater for current and future residents. It is organized as a political action committee in order to circulate ballot measure petitions to create Active Management Areas in the Willcox and Douglas Groundwater Basins. AWD is committed to continued engagement in order to maintain and rebuild our community’s ability to survive and thrive with a healthy groundwater reserve.