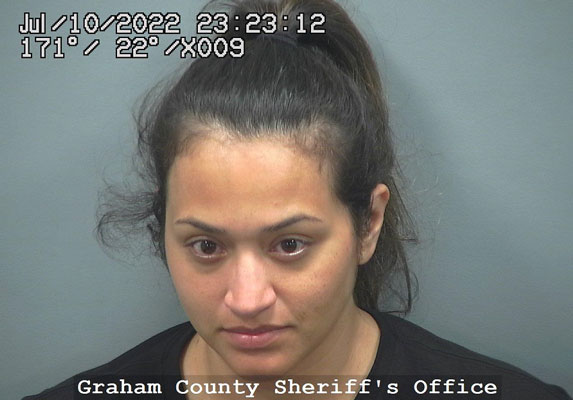 GRAHAM COUNTY – A woman believed to be transporting illicit drugs took time out of a high-speed chase with pursuing law enforcement on Sunday to drop off her 10-year-old son at the Safford High School before continuing her flight. She eventually crashed east of Safford.

Law enforcement was on the lookout for Palma’s vehicle, a red, Chevy SUV, after receiving an anonymous tip on its Text-A-Tip line at 5:20 p.m. advising Palma was transporting drugs from Phoenix back to the area. The tip said Palma was traveling through Bylas at the time.

The scene could have come straight from pages of the next “Fast and Furious” script early Sunday evening when a Graham County Sheriff’s Office deputy initiated a traffic stop on Palma’s red, 2021 Chevy Trax SUV for speeding 78 mph in a 65 mph zone of Highway 70 just west of the cotton gin. Palma pulled over near the intersection with 1200 South (Patterson Mesa) and the deputy noted a juvenile male passenger in the rear seat. After seeing items consistent with drug involvement, the officer requested a search of Palma’s vehicle, to which she declined. At that point, the deputy called for the county’s K-9 Officer Kukui and handler to inspect the vehicle.

However, as Kukui was being deployed, Palma ran away from the deputy and a Pima officer, got back into her vehicle, and drove away at a high rate of speed.

The flight would eventually encompass the three communities of Pima, Thatcher, and Safford, as Palma sped down Main Street in Pima at 60 mph before doing a loop around Tidy Acres and then heading south on Cluff Ranch Road in excess of 90 mph.

Palma then went on the dirt Upper Layton Road northeast at about 65 mph and the pursuit was called off for safety reasons. Officers continued to follow at a slower pace, however, and while one would lose sight another father up would catch a view.

While they were not actively chasing her at that point, according to the Sheriff’s Office report, law enforcement members were reporting Palma continued to drive erratically as she went through Thatcher and Safford, running stop lights and stop signs. At that point, a Thatcher officer said he observed a juvenile male exit the vehicle on 14th Avenue at the Safford High School and the vehicle then continued at a high rate of speed south on 14th Avenue. The Thatcher officer stayed with the youth and later released him to his father.

A deputy attempted to pull Palma over at 12th Avenue and 26th Street but she failed to yield and units pursued Palma east on Discovery Park Boulevard. She then went into the cemetery, then west on Discovery Park Boulevard, where she dodged a set of spike strips set out by the Safford Police and headed north on 20th Avenue. She went through the mobile home park at 20th Avenue and Golf Course Road to dodge spike strips set by the Thatcher Police and then headed westbound on Golf Course Road in the lane of oncoming traffic.

Palma then went down Reay Lane to First Street in Thatcher, jumping across the highway. The chase went through multiple Thatcher side streets, including Third Avenue and Church Street, where Palma reportedly nearly struck a vehicle in the area of the roundabout. Palma then went into the Thatcher High School campus but was trapped by a closed gate and law enforcement behind her.

Forced with nowhere left to go, Palma allegedly turned around and drove at the officers, nearly striking their vehicles and forcing them to take evasive maneuvers, according to the report.

Palma continued to flee down a farm road and around the tennis courts before heading back out toward the roundabout. She then drove over spike strips laid out by TPD, but they didn’t appear to have any effect. She continued northbound onto First Avenue and nearly struck another Safford officer’s vehicle. Palma then headed eastbound on Highway 70 at 100 mph as she weaved in between traffic and drove on the wrong side of the road at oncoming vehicles.

After passing through Safford, Palma reportedly attempted to turn onto San Jose Road but took it too fast and wrecked into a fence. The deputy reported Palma was laughing and talking on her cell phone when she was taken into custody.

A search of the vehicle yielded a couple of glass pipes with meth residue, a couple of grams of methamphetamine, and 27 blue, counterfeit Oxycodone pills with fentanyl. A small amount of marijuana and an open “shooter” bottle of alcohol were also located in the vehicle.

After taking a sample of blood for testing purposes, Palma was booked into jail for the above-listed offenses.