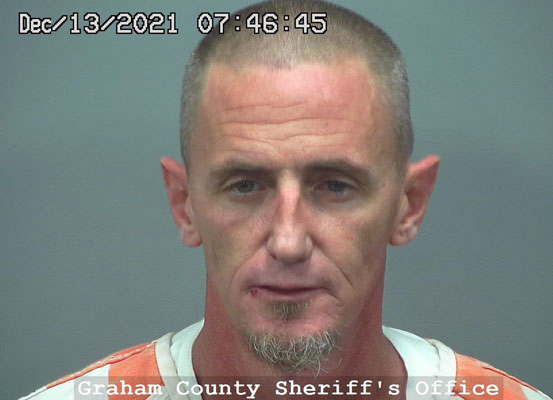 Contributed Photo/Courtesy GCSO: James Lee Tadlock is facing numerous drug charges after allegedly selling to an undercover operative twice and being caught with 1.5 pounds of meth.

PIMA – An alleged meth dealer who has been on law enforcement’s radar is facing decades in prison after allegedly selling meth to an undercover officer twice and being caught in possession of 1.5 pounds of the drug.

James Lee Tadlock, 47, of Pima, is facing three separate cases that all involve methamphetamine for sale.

That case stems from a traffic stop on Dec. 13, 2021, in which Tadlock was believed to be driving under the influence. A DPS Trooper initiated a traffic stop on U.S. Highway 191 just south of Safford at about 1:38 a.m. after Tadlock showed signs of inebriated driving, according to a DPS report.

After performing poorly on field sobriety tests, Tadlock was arrested for DUI. A subsequent search of his car yielded a .45 caliber handgun with five rounds in the magazine and one in the chamber, and a blue bag that had 1.5 pounds of meth inside a ziplock-type baggie.

Tadlock was then arrested and booked into jail. All three cases have been bound over to Graham County Superior Court for adjudication.