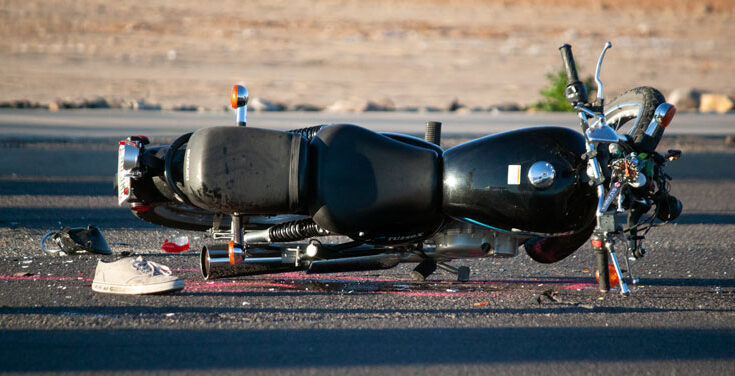 Jon Johnson Photo/Gila Herald: A motorcyclist was taken to MGRMC early Friday morning after colliding with an SUV that pulled out in front of him on U.S. Highway 70 in Thatcher.

THATCHER – A motorcyclist was taken to the Mount Graham Regional Medical Center early Friday morning after being involved in a collision on U.S. Highway 70.

According to Thatcher Police Chief Shaffen Woods, the motorcyclist was westbound on the highway when a black Lincoln Navigator entered the roadway southbound from First Avenue and failed to yield to the motorcyclist. The SUV driver reportedly told an officer that he didn’t see the motorcycle before beginning to cross the highway.

The motorcyclist T-boned the rear driver’s side of the SUV, busting a window and denting a quarter panel and wheel. The motorcycle was also severely damaged in the collision.

The impact was so forceful it caused the motorcyclist’s helmet to come off. The crash was witnessed by a Thatcher Police officer, according to Chief Woods. He added that the motorcyclist was conscious and alert and talking to officers at the hospital.

Woods said the driver of the SUV is likely to be given a citation as being at fault, however, the officers were still working the scene at the time of initial reporting.

Officers from Safford assisted at the scene with traffic control and the vehicles were removed from the roadway. Westbound lanes were limited to one lane for a time and the eastbound lanes had a slight detour to allow the tow truck company space to work and the officers to thoroughly document the scene.