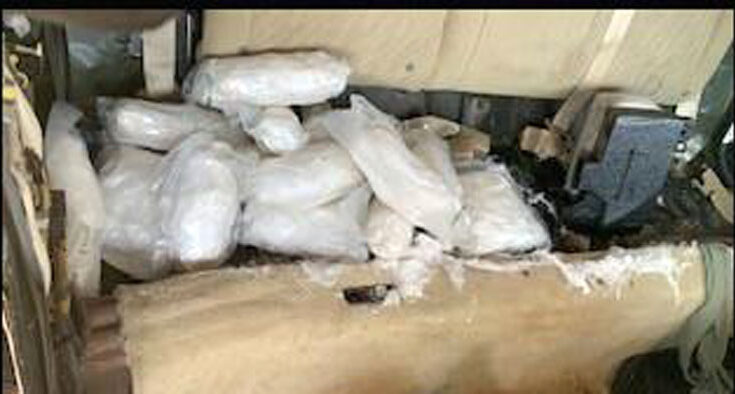 Contributed Photo/Courtesy U.S. Customs and Border Protection: Agents seized $157,000 worth of meth inside a smuggling vehicle.

A U.S. Border Patrol canine assigned to checkpoint duties alerted to an odor it was trained to detect emitting from a 2006 Honda Civic with a single occupant in the primary inspection lane at approximately 9 a.m.

Wellton Station agents conducted a secondary inspection of the vehicle where they found 45 vacuum-sealed packages of methamphetamine in the vehicle’s rear quarter panels. The methamphetamine had an estimated street value of more than $157,000.

The male driver, a 26-year-old Lawfully Admitted for Permanent Residence (LAPR) from Mexico, with a Yuma, Arizona address was arrested on drug smuggling charges. The narcotics and the vehicle were seized.

Drug smugglers attempting to transport deadly drugs into the interior of the United States will use anyone to transport their product with no regard to legal consequences for those involved. LAPRs can legally be deported if they violate certain U.S. immigration laws. LAPRs can be placed into removal proceedings if convicted of two separate crimes categorized as a “crime of moral turpitude,” or a single aggravated felony.

Agents referred the rental vehicle, a 2019 Dodge Charger, to the secondary inspection area after a positive National Crime Information Center (NCIC) alert of “armed and dangerous.” Agents conducted routine checks on the vehicle and occupants and learned all three males were wanted for a double homicide investigation out of Montclair, California.

During the course of the investigation, agents also located about six pounds of marijuana that has an estimated street value of $2,100.

Agents initiated extradition of the three suspects and seized the marijuana.