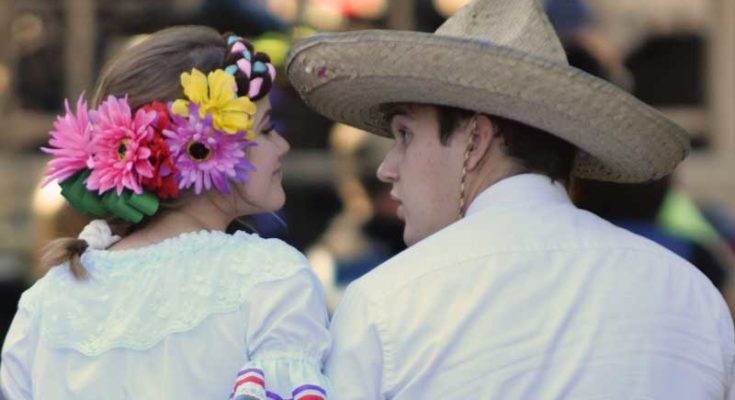 MORENCI – It was colorful, very colorful, between the music and folkloric dancing at the Cinco de Mayo celebration at DeGrazia Park in Morenci last Saturday. The event was sponsored by the Morenci Community Center.

The band XS kept the crowd fully entertained with its Tejano-style music. Original compositions comprise most of the XS music. The band primarily played its Tejano music and some of those were also northern Mexico classics.

Topping off the event with grace and beauty was the Eastern Arizona College Folklorico dance group. Neither any of the women or men missed a step in their flowing movements. The women’s long traditional-style dresses were absolutely beautiful. They covered the colors of the rainbow – blue, red, green, yellow, orange – as the dancers flitted about like elegant butterflies.

Observers’ attention was riveted on the dancers, including the men who wore the traditional large sombrero, white shirts, and boots. It was obvious that the men and women had practiced long hours in perfecting their performances.

XS lead singer and guitarist Ben Rodriguez led the band that brought many comments, such as “Wow!” from the audience scattered throughout the park. Rodriguez cheerfully announced that the band has its roots in Greenlee County (Duncan). All, if not most, of the band members have surnames of Rodriguez and are in fact related.

Among highlights of the music was another tradition, an accordion played by the female member of the group.

XS cranked out its music until about sunset and no one appeared the least disappointed when they left the fiesta after having enjoyed their exposure to XS.

Food? Once again, tradition struck a cord with tamales, green chile tacos with all the fixings.

Indeed, A good time was had by all.

The Fiesta was one of many special events organized and sponsored by the Community Center throughout the year. Most recently, the Morenci Library, which is a wing of the Community Center, held a Star Wars celebration that was a big hit with children and many parents.

There are full-sized booklets available that have schedules for various events. The booklets are available at the center and other locations throughout Morenci and Clifton.