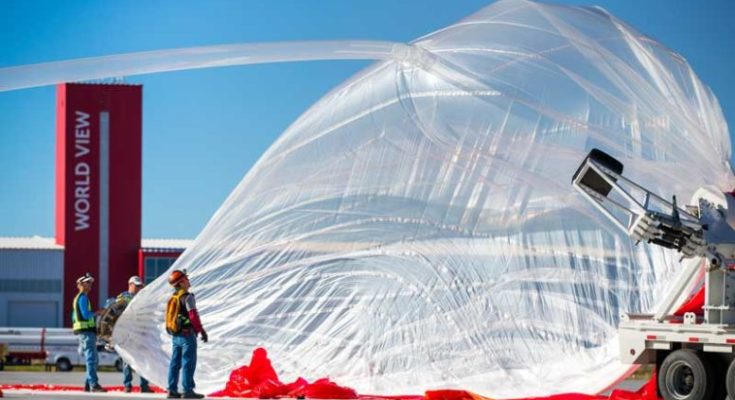 Contributed Photo/Courtesy World View Enterprises: A high-altitude balloon gets ready for launch. A malfunction of such a balloon caused its payload to detach and land in the desert east of Safford.

GRAHAM COUNTY – The payload of a high-altitude balloon by World View Enterprises made an emergency landing Wednesday, April 18, in the desert near the Hackberry Ranch turnoff from U.S. Highway 70 east of Safford.

A Graham County Sheriff’s deputy was dispatched to the area after a helicopter was viewed parked in the desert area with apparently nobody around it.

Upon arrival, the deputy met four subjects who said they were employees of World View Enterprises, which leases space from Pima County for its launch pad near the Tucson airport it calls Spaceport Tucson.

According to the deputy’s report, a World View employee said the helicopter was a support helicopter that was in the area to retrieve a “Stratollite” that had separated itself from its balloon after the balloon had a malfunction as it was traveling from Tucson to New Mexico. The Stratollite then landed in the desert.

The Stratollites are the payloads of the main, high-altitude balloon and independently have a parachute for landing themselves.

The employee said the helicopter would carry the Stratollite to a safer location, where a crane would load it onto a transport vehicle.

World View Enterprises spokesperson Andrew Antonio told the Gila Herald that the deployment was a confidential mission for a government customer and that he couldn’t comment any further but to say that they had “executed a very safe and controlled landing.”

According to its website, the Stratollites can maintain position over specific areas of interest for months on end and with the ability to carry a variety of commercial payloads can be used for a variety of applications, including communications, weather gathering, remote sensing, and other research.

Below is a video from World View Enterprises showing its Stratollite program and how it may have looked when the payload landed in the desert.

The company was investigated after a balloon tore and exploded during launch in December 2017, causing $200,000 in repairs to the facility and sending three employees to receive medical attention for ringing in their ears.

Below is a clip from Tucson television news channel 9 showing video of the explosion taken by the Arizona Daily Independent newspaper.

In addition to its high-altitude, low-cost commercial flight capabilities, the company also aims to take passengers into the stratosphere more than 100,000 feet from the Earth with its Voyager missions.