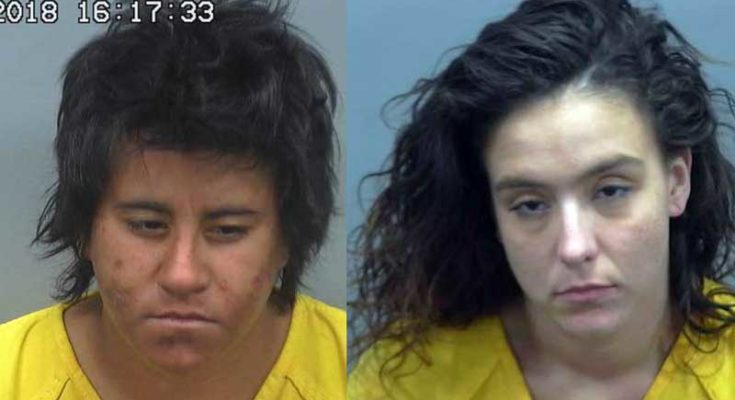 SAFFORD – Donavee Perea, 22, and Tonya Reed were arrested and booked into the Graham County Adult Detention Facility on Jan. 31 regarding drug charges and a warrant.

The women were taken into custody after Perea was seen with two other males allegedly attempting to break into a storage unit in the alleyway behind Trophies N’ Tees at 513 W. Main St.

According to a Safford Police report, a concerned citizen noticed the group in the alley attempting to break into the storage unit. Upon arrival of the police, the three subjects (the two men and Perea) had left the alley and were outside the front of the store.

During interrogation, one of the men allegedly admitted the group was in the alley, but all three denied attempting to break into the storage unit, although evidence at the scene appeared to suggest otherwise.

While she was being questioned, officers learned Perea had a warrant for her arrest out of Safford Justice Court regarding charges of possession of a dangerous drug, possession of marijuana, and possession of drug paraphernalia. The warrant carried a $5,000 cash bond.

As an officer began to handcuff Perea to take her into custody on her warrant, she informed them that she had drugs and drug paraphernalia hidden in her underclothing. A female officer then retrieved two glass meth pipes and a few Oxycodone pills from Perea, who said the pills were hers but the pipes belonged to another female, Reed, who had previously walked away from the group as they were being investigated by the officers.

Reed was located in the 300 block of Main Street and was brought back to the scene. Once there, however, she ran from officers and had to be tackled and forced to the ground, according to the police report.

Reed was then taken into custody and booked into the jail on a single charge of possession of drug paraphernalia.

Perea was booked into the jail on her warrant, with additional charges of possession of a narcotic drug and possession of drug paraphernalia pending review from the Graham County Attorney’s Office.