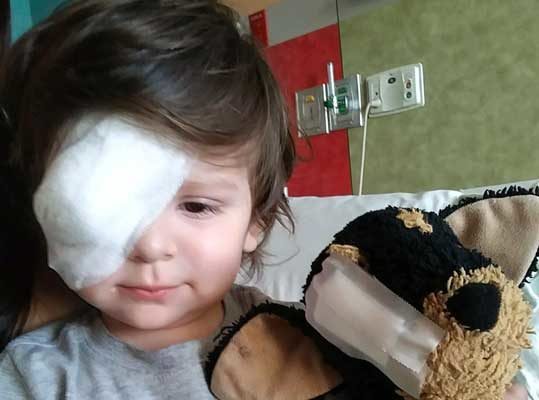 Contributed Photo/Courtesy Gina Trujillo: Bradley Villalba, 2, is recovering from having his eye removed due to cancer and will have a benefit lunch this Friday, from 10 a.m. to 2 p.m. at the American Legion at Firth Park.

SAFFORD – A 2-year-old child should be joyous and be experiencing the sights, sounds, smells, and tastes the world has to offer them. Despite having his right eye removed due to cancer, Bradley Villalba still has that innocent joy for life.

Bradley was diagnosed with retinoblastoma, which is a rare form of eye cancer that begins in a person’s retina. It is more often found in children than adults and can occur in one or both eyes. According to the Mayo Clinic, the condition occurs when nerve cells in the retina develop genetic mutations, which grow and spread as healthy cells die.

“He just happened to be one of the 300 who get it every year,” Bradley’s aunt, Gina Trujillo said. “He’s a little guy, but for being so young, he’s adapting pretty good. He’s bouncing back a lot better than we hoped for.”

After the cancer discovery, Bradley had his right eye removed at Phoenix Children’s Hospital. The medical professionals reported that the cancer was contained to the eye, but Bradley still has weekly follow-ups at the hospital to make sure it hasn’t spread and to check on the healing process, according to Trujillo.

If not properly treated, the cancer could metastasize to other areas of the body, including the brain and spine.

To help him and his family moving forward with his continued treatment, a benefit is being held Friday, Feb. 9 from 10 a.m. to 2 p.m. at the American Legion at Firth Park. Volunteers at the benefit will be selling pulled pork sandwich plates with macaroni salad and there will be windshield repair in the parking lot with all proceeds going to the family. The windshield repair will take insurance claims. To preorder the food plates call or text (928) 965-5682, (928) 432-2764, or (928) 322-4457.

Additionally, a raffle will be held with various prizes, including a Samsung 9.6-inch tablet, Fitbit Charge2, gift certificates from local businesses and gift baskets.

So far, tests have shown Bradley’s cancer has not gone past the optic nerve and has not spread beyond the eye that was taken out. According to Trujillo, Bradley is still going to weekly exams at Phoenix Children’s Hospital, and will soon be fitted for a prosthetic, but his family hopes soon the weekly appointments will be whittled down to monthly visits.

If you’ve got a hankering for pulled pork or just want to come support Bradley and say hi, be sure to visit the American Legion at Firth Park this Friday, Feb. 9 from 10 a.m. to 2 p.m. Donations are also being accepted here.

“We’re hoping to get a good turnout for him,” Trujillo said. “He’s a trooper, though. He’s tough.”

What: Benefit for Bradley Villalba

Where: American Legion at Firth Park

Why: To help with medical costs regarding his eye cancer 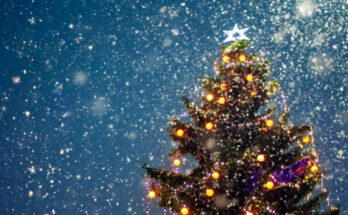