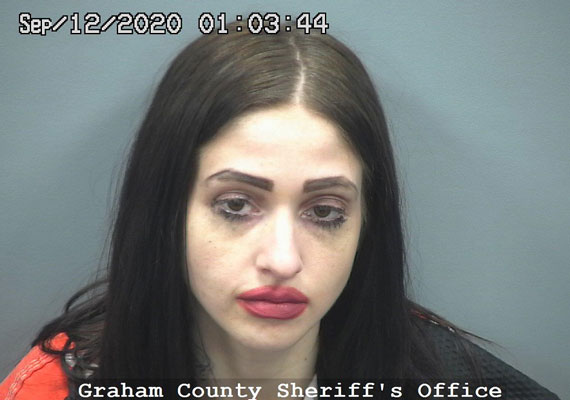 Contributed Photo/Courtesy GCSO: Destinee Ballard has been found incompetent to stand trial on child abuse charges, but prosecutors are hopeful she can be restored to competency.

SAFFORD – A woman who left her 4-month-old son for dead underneath a woodpile for approximately 12 hours has been deemed “not yet competent” to stand trial.

Destinee Ballard, 22, faces three counts of child abuse and one count of endangerment. However, as of a Rule 11 evaluation report from Dec. 8, the defendant is “not yet competent and it is suggested she be retained for further treatment.”

The infant’s grandfather found the boy shortly after 9:30 p.m. on Sept. 11, after investigating a noise he heard from a woodpile in the backyard. The man said he thought a cat was making the noise but upon closer inspection, he located a baby under the pile of wood wearing nothing but a diaper, which was full of feces, dirt, and debris.

At first, neither grandparent recognized the child and wondered who could have left a baby there. Upon cleaning up the boy, however, they realized it was their own grandchild.

The grandparents confronted the child’s mother, Destinee Ballard, who allegedly told them that she believed her baby was deceased. Upon informing her that the baby was found underneath the woodpile, Ballard allegedly said the infant “must have reincarnated.”

At that point, the grandmother called the police, who were dispatched at about 10:06 p.m. Upon arrival, officers noted the child had several scrapes to his arms, legs, neck, and face – which was also flushed red likely due to sun exposure. An ambulance was dispatched and paramedics examined the boy. Afterward, he was left in the care of his grandparents.

When questioned, Ballard allegedly told an officer that her child had died from sudden infant death syndrome (SIDS). The grandmother advised Ballard had been acting odd all day.

Prosecutors are hopeful Ballard will be able to be restored to competency in order to stand trial.