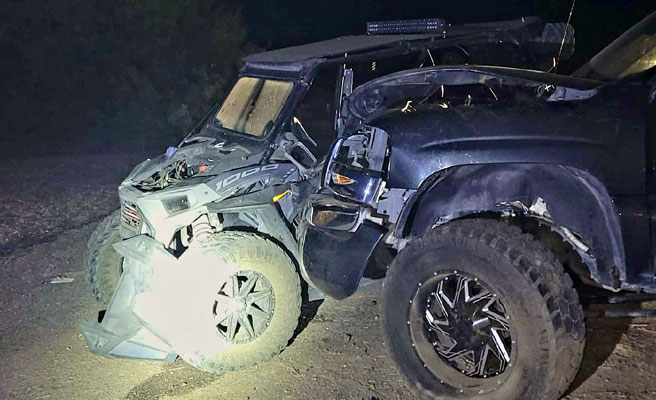 Contributed Photo/Courtesy Andy Bell: This photo shows the GMC pickup and Polaris RZR as they looked after colliding on May 13.

GRAHAM COUNTY – It took more than three weeks before 31-year-old Coralee Allen opened her eyes after being knocked unconscious in a severe collision on Highway 366 (Swift Trail), but on Monday she was able to see her family and friends again.

Her long road to recovery is just beginning, but she nearly didn’t get the chance as doctors were skeptical Allen would ever regain consciousness.

Allen continued her miraculous recovery in recent days and was released from the intensive care unit (ICU) at St. Joseph’s Hospital in Tucson, where she was flown the night of her collision. She has been transferred to a nearby long-term care facility in Tucson, where she expects to continue her recovery for possibly the next six months to a year. Just more than a week prior, however, Allen’s brother, Adam Rossow, had been in discussions with the medical staff about ending care if no brain activity was seen.

“Just a week and a half ago I was talking to doctors and nurses about the process of pulling the plug,” Rossow told the Gila Herald. “It sucked. I hope nobody ever has to do that. To have those kinds of conversations and wrap your brain around (them). It’s your responsibility to let her go or let her sit there.”

According to a report from the Graham County Sheriff’s Office, deputies were dispatched at 9:51 p.m. on May 13 to the area of Highway 366 and W. Boulder Lane regarding a collision between a pickup truck and a UTV. Upon arrival, a GMC truck and a Polaris RZR Side by Side were intertwined with the front of the truck embedded into the driver’s side of the UTV, and a deputy located Allen unconscious and bleeding. The deputy helped stabilize Allen with a C-Spine collar until he was relieved by firefighters and EMS personnel.

Rossow was riding in a different UTV behind his sister and was one of three total Side by Sides in the group. He reported the group had gone for a night ride but decided to bring Allen’s daughter back home after she had fallen asleep. The girl and Allen’s juvenile niece were riding in the Polaris RZR at the time of the collision – both were wearing helmets and had their seat belts fastened. Rossow said they were less than a half-mile from their home when a truck passed by him as he drove along the side of Highway 366 just past the Mt. Graham Market.

“He passed me like I was sitting still,” Rossow told the Gila Herald. “As soon as he passed me I knew it. I don’t know how I knew it but I felt it and there was nothing I could do to stop it.”

Rossow said he was going about 42 mph when the truck passed him and that he watched as it kept gaining on his sister’s UTV, which was about an eighth to a quarter-mile ahead on Highway 366.

“I saw her brake lights come on and her signal left,” Rossow said. “And she went to turn left and he never even hit his brakes . . . He T-boned her and she took the brunt (of the collision). In his statement, he said he was trying to pass. He never entered the eastbound lane until he was 20 feet from her and it was only, in my opinion, it looked like he only entered it after she started turning as a reaction to her turning. It wasn’t that he was going to pass her. He was going to go through her. If she had just stayed where she was and never turned he still would have hit her.”

Rossow also described the scene he came upon when he caught up to the collision site.

“His truck was in her driver’s seat when I got there and she was in the passenger seat over the top of (her niece),” Rossow said. “Her seat belt was the only thing stopping her from being thrown out. I removed the girls from the Side by Side after making sure they were ok and conscious and all. And then I held my sister up as much as I could and made sure she was breathing. I did my best to shut the RZR off because it was still running – the music was still playing. His truck was still steaming and smoking inches away – it was not good.”

Allen’s 9-year-old daughter only sustained minor injuries and was sore. She was wearing her helmet and seatbelt, according to Rossow. Allen’s 12-year-old niece had her helmet knocked off in the collision and suffered a severe concussion along with an injury from the seatbelt, however, she is expected to make a full recovery.

A Sheriff’s Office deputy located an open beer in the truck along with a “box” of beer and an ice chest full of ice and alcoholic beverages. The deputy also noted that the driver of the truck, Eloy Raymond Otero, 43, of Safford, had a “moderate odor” of an alcoholic type beverage emanating from himself.

Otero allegedly told the deputy that he and his passenger were going up the mountain to talk and he was passing up the UTVs doing about 55 or 60 mph when Allen’s UTV turned into him. He said he passed one UTV and was going to pass the rest when “she (expletive deleted) turns right into me.) Otero’s passenger also said they were passing the group when Allen’s UTV turned into them. There were no injuries listed for Otero or his passenger. The crash and DUI investigation is being headed by the Arizona Department of Public Safety and is ongoing.

According to Rossow, Allen has had 10 surgeries since the crash and suffered injuries to her liver, lower intestine, bladder, colon, and lung, as well as multiple fractured bones – including a skull fracture – and brain bleeds.

Otero was arrested by an Arizona Department of Public Safety trooper upon suspicion of DUI and aggravated assault, and a warrant was obtained to secure blood for testing purposes. After securing the sample, Otero was given a copy of the phlebotomy report and was booked into the Graham County Adult Detention Facility on an unrelated warrant with possible charges pending lab test analysis and view by the Graham County Attorney’s Office. Otero’s probation was also recently revoked and he currently remains incarcerated.

Rossow has organized a GoFundMe account to assist Allen with her medical expenses and other needs. In addition to that, he said there are several local raffles that have popped up and on Aug. 20 from 5 – 9 p.m., there will be a fundraiser at Thatcher Park with jumping castles, face painting, 50/50 raffle, cornhole tournament, and more.