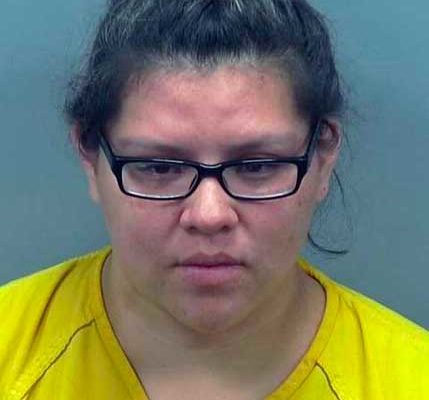 Contributed Photo/Courtesy GCSO: Terri Yazzie was booked into jail for child abuse after allegedly leaving her two young children locked outside of their house and alone to go on a shopping trip with her mother.

SAFFORD – Terri Yazzie, 25, was booked into the Graham County Adult Detention Facility on Monday, May 21, and charged with child abuse after allegedly leaving her two young children outside and alone for four hours to go shopping.

According to a Safford Police Report, Yazzie left her 5-year-old and 7-year-old children locked outside of their residence without any food or water in the heat of the day and didn’t return for nearly four hours. The children spent some time over at a neighbor’s house, and when Yazzie failed to return, police were dispatched to the residence.

After unsuccessful attempts to reach Yazzie through her cell phone, the officers were about to take the children to the police department when Yazzie returned.

She allegedly told officers that she had just made a short trip to Walmart to return a printer and thought the children had arranged to stay at a neighbor’s house while she was gone – her 5- and 7-year-old children.

An officer questioned why it took so long to return the printer, and Yazzie advised that after her trip to Walmart she took her mother out to eat and simply lost track of time because her cell phone was out of power. She said by the time she returned her mother to her residence in Thatcher, more time than she thought had passed.

Yazzie then advised that she thought her 12-year-old neighbor was going to look after her children. She then changed her account and said she had arranged to leave her daughter with a different neighbor and had asked the 12-year-old to check on her. The third neighbor told police that her daughter was playing with Yazzie’s daughter earlier that day, but Yazzie had never asked her to watch the youth.

A representative with the Arizona Department of Child Safety (DCS) arrived and took in the situation. An examination of Yazzie’s residence found it to be lacking in proper hygiene and that it was in disarray. Additionally, there appeared to be no bedding for the children to sleep. The children were then taken by the DCS worker and placed them with their grandmother, while Yazzie was transported to the jail and booked for child abuse.