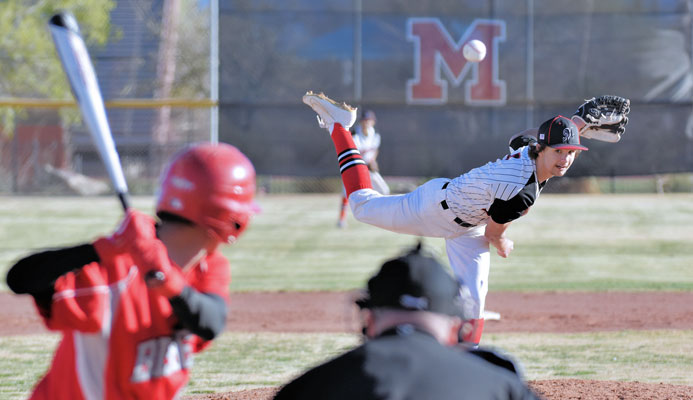 Raymundo Frasquillo Photo/Gila Herald: Daylen Johnson delivers a pitch to a Bisbee batter during the season opener March 17. The Morenci sophomore was the starting pitcher as the home team prevailed 17-1 in an abbreviated non-region contest. The 4-0 Wildcats host the 0-1 Eagar Round Valley Elks for a third region contest Tuesday, March 30.

Morenci hosts Round Valley on Tuesday

MORENCI – The 2021 Morenci “Boys of Spring” posted a 17-1 season-opening abbreviated win over the Bisbee Pumas on March 17, followed by a come from behind 6-4 win over the Tempe Prep Knights on March 20, and an 11-7 region win over the Pima Roughriders on March 23, all played in Francis Waldorf Stadium. The Christopher Aguallo-coached Wildcats broke a 7-7 regulation tie in Saint Johns with 11 runs on March 26.

How could they do all that?

“We were better prepared at this point than last season,” Aguallo said.

The 2020 Wildcats  (6-2 overall, 3-1 seeding, 2-0 region) played only three weeks before the season was put on hold and called off with the closing of “in-class learning” by the state governor.

This week, Round Valley is at Morenci and Saint Johns at Pima on Tuesday, March 30 in region pairings.

Other games for region members include Round Valley at Heber Mogollon and Saint Johns at Joseph City on Thursday, April 1 along with Pima at Winkelman Hayden on Friday, April 2.

Morenci scored 11 8th-inning runs and limited the hosts to a lone run during an extra-inning of play. Preston Jonson walked, Morey bunted on, Roybal got on with a fielder choice bunt, and Daylen Johnson was beaned with the bases loaded to drive in Preston Johnson. A fielding error following the swing of Reyes’ bat allowed Morey and Roybal to come in, Araiza singled on, Anthony Ballesteros singled on with one out and a throwing error got Araiza in. Saenz walked and Preston Johnson was beaned to load the bases, Morey walked to drive in Ballesteros, Roybal’s sacrifice centerfield fly allowed Saenz to score, Daylen Johnson singled in Preston Johnson with two outs, and a Reyes double drove in Morey and Daylen Johnson before the ensuing batter struck out.

Trailing 3-7 after six, the Wildcats sent eight batters to the plate in the 7th-inning, added four runs to knot the score, and limited four Redskins to no runs. Four consecutive walks, allowed as many Wildcats on, two wild pitches brought two in, and two host errors got two more runners on plus allowed runs six and seven to come in.

The score was tied 1-1 after a complete inning of play, added four in the second, and one each in the fourth and fifth (1-7) before Morenci added two in the sixth.

Morenci scored initially as a walked Roybal crossed the plate on an error with two outs in the bottom of the first inning. The Wildcats never trailed thereafter, adding two in the second before the visiting Roughriders scored two in the fourth. Hernandez drilled a 2-strike pitch over the 350-foot left-field fence, driving in Araiza along with himself to give the home team a 3-0 advantage.

Five runs were added in the fifth, a bases-loaded walk to Roybal with one out sent in a singled Hernandez, and Martinez cleared the bases with an inside the park right-centerfield homer. Roybal and singled Anthony Ballesteros and Preston Johnson crossed the plate ahead of Martinez. The Wildcats capped their scoring with three in the sixth, all on as many errors.

Pima scored twice in the fourth, once in the fifth, and four times in the seventh.

Having taken a 4-0 advantage after two innings, the Knights were limited to no more than four batters up during the next five innings.

Roybal, Morenci’s starting pitcher, retired the visitors in order during the third, and except for a throwing error allowing a batter to reach first base, retired the next three batters in the fourth. Two errors and three walks had five Knights reaching first as reliever Reyes faced the next 13 batters.

The Wildcats trailed 4-0 before crossing the plate twice in the bottom of the third inning. With two outs and a runner on, Roybal turned a two-out, 1-1 pitch into an RBI double and senior infielder Martinez followed with a one-ball pitch RBI double, cutting the deficit to two before the third out.

Morenci added four runs in the fifth with one out, tying at four apiece, and crossing two more for the go-ahead final score. A walked Preston Johnson and singled Morey tied the score plus a walked Martinez and singled Reyes came in on a throwing error. The Wildcats were retired in order in their ensuing eight-plate appearances.

The visiting Pumas scored once during their initial plate appearance, both reaching first and coming home on errors while sending five up. However, the perennial state contender sent no more than five in its next four offensive series. The Pumas totaled nine strikeouts, four fly-outs, and two ground-outs.

On the other side of the diamond, the hosts scored six runs with nine batters up in the first, five with 11 up in the second, and three each with nine up in both the third and fourth.