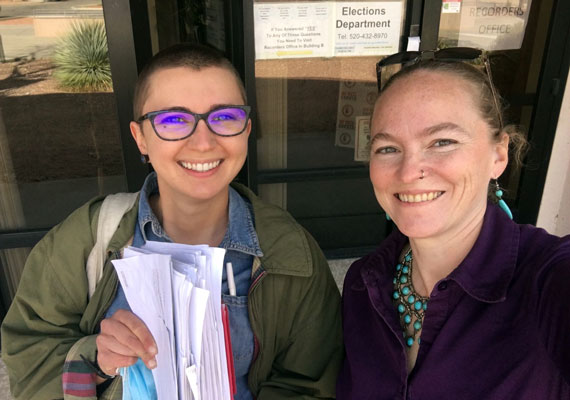 Contributed Photo: Arizona Water Defenders Chair Ashley Dahlke and Treasurer Rebekah Wilce prepare to turn in a petition with more than the required amount of signatures to put an Active Management Area for the Willcox Groundwater Basin on the November ballot.

BISBEE – The Arizona Water Defenders (AWD) recently submitted a petition to Cochise County Elections for a November 2022 ballot measure to create an Active Management Area (AMA) for the Willcox Groundwater Basin. Signatures on the petition exceed the required 10 percent of registered voters living within the Willcox Basin.

The 1980 Groundwater Management Act allows residents of a community to initiate these groundwater protections themselves at the ballot. Until now, however, no other Arizona residents have successfully taken advantage of this legal opportunity.

“This groundbreaking grassroots effort to create a new AMA – to control this loss of groundwater by putting a proposition on the ballot – will allow voters in the Willcox Basin to decide whether to protect their common groundwater supplies,” said Kathleen Ferris, one of the architects of the 1980 Groundwater Management Act and one of the first directors of the Arizona Department of Water Resources (ADWR).

“Rapid expansion of new and ever deeper wells has caused groundwater levels in the Willcox Basin to drop and long-existing wells to go dry. This measure is allowed by the 1980 Groundwater Management Act, and in the threatened Willcox Basin, the time to act has arrived,” Ferris added.

Arizona has five AMAs in other parts of the state, but there are no safeguards in many rural areas like the Willcox Basin to prevent the overpumping of groundwater by the high-capacity pumps typically used in agricultural operations. More than 90 percent of groundwater extracted from the basin is for agricultural use, according to ADWR.

Overpumping in the Willcox Basin is causing land subsidence at the highest rate in the state, according to ADWR, leading to earth fissures opening across roadways. National and international media have reported on the dramatic drop in the basin’s water levels and the hardships caused in the community, but ADWR has repeatedly declined to use the Groundwater Management Act to create new AMAs either in the Willcox Basin or elsewhere.

Cheryl Knott, who coordinated AWD’s signature gathering for the Willcox Basin, said that residents’ lives are being made more difficult every day as groundwater levels continue to drop. “People want the overpumping of our groundwater to stop,” Knott said. “Voters living in Sunizona, Sunsites, Cochise, Dragoon, Willcox, and the surrounding area have all signed the petition.”

Ashley Dahlke, AWD Chair, said, “It’s become increasingly clear how crucial this first step in protecting our groundwater is. We’re excited and energized to continue our work to get an AMA for the Douglas Basin on the November 2022 ballot as well.”

About the Arizona Water Defenders

The Arizona Water Defenders is a community group that works to preserve groundwater for current and future residents of the Sulphur Springs Valley in far southeast Arizona. It is organized as a political action committee in order to circulate ballot measure petitions to create Active Management Areas in the Willcox and Douglas Groundwater Basins. AWD is committed to continued engagement in order to maintain and rebuild our community’s ability to survive and thrive with a healthy groundwater reserve.