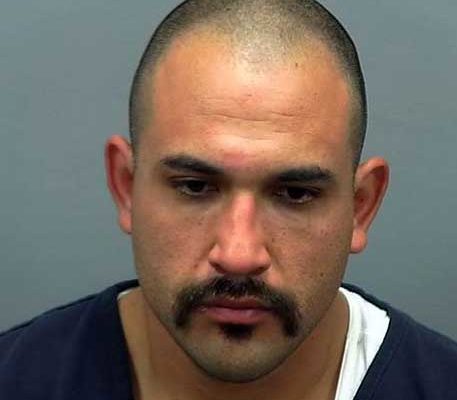 Contributed Photo/Courtesy GCSO: Daniel Dominguez was arrested on a warrant for drug and weapons charges.

SAFFORD – The keen eye of a Safford Police officer led to the arrest of a wanted man and the seizure of weapons and drug paraphernalia Sunday evening.

According to a Safford Police report, an officer was on patrol at about 5:39 p.m. when he noticed Dominguez and a woman parked in a vehicle outside a residence on 7th Street. After running the license plate and seeing the car indeed belonged to Dominguez, who had the active warrant, the officer confronted Dominguez and placed him under arrest.

A search of the vehicle yielded a loaded BB-gun that resembled a real handgun, a 15-inch knife, a glass pipe with apparent meth residue, eight cell phones, a blond wig, small pocket knives and multi-tools, and a small scale commonly used to weigh drugs.

Dominguez denied ownership of the pipe and scale and said he used the BB-gun and knife when he goes camping.