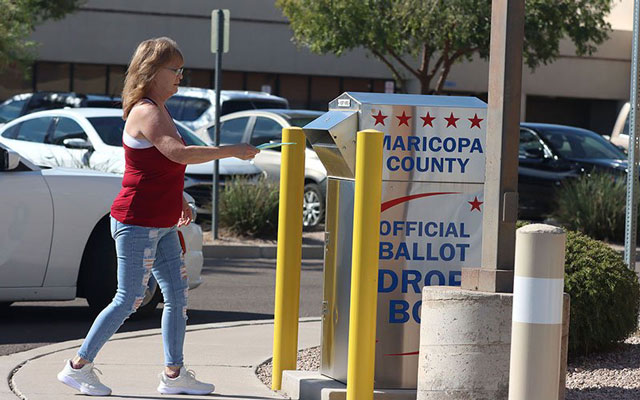 File photo by Alexia Faith/Cronkite News: A voter drops her ballot off last week at the Maricopa County ballot drop box outside the county juvenile court, where several intimidation incidents have been reported.

WASHINGTON – A federal judge could rule as early as Friday on a request to ban groups that have been monitoring ballot drop boxes, in response to voters who testified Wednesday to feeling intimidated as they cast their ballots.

The lawsuit by the Arizona Alliance for Retired Americans and Voto Latino claimed that Melody Jennings, the leader of a group called Clean Elections USA, has incited voter intimidation in Arizona and around the country by encouraging people to watch ballot boxes, photographing and sometimes engaging with voters.

The lawsuit alleges that the “defendants’ coordinated campaign of vigilante voter intimidation” violates the Voting Rights Act of 1965 and the Ku Klux Klan Act of 1871. Attorneys for the voters’ groups urged U.S. District Judge Michael Liburdi to impose a temporary injunction to “prohibit defendants from gathering within sight of drop boxes” and from filming, following or photographing potential voters and from “training, organizing, or directing others to do those activities.”

But while Veronica Lucero, the attorney representing Jennings and Clean Elections USA, expressed sympathy for witnesses in Wednesday’s hearing, she argued that there is no evidence showing a clear connection between her clients and reports of voter intimidation in Arizona.

The trial comes as the Arizona secretary of state’s office has received at least five reports of voter intimidation at ballot drop boxes in Maricopa County. Those reports describe groups of people sitting in lawn chairs outside the voting complex and filming people as they drop off their ballots, accusing voters of being ballot mules and more.

The secretary of state’s office transferred the reports to the Justice Department and the FBI’s Arizona field office for further investigation.

The Maricopa County Elections Department on Friday posted on Twitter that “two armed individuals dressed in tactical gear” were seen in the parking lot of a ballot drop box in Mesa.

The first half of a three-hour hearing before Liburdi Wednesday afternoon was taken up by witnesses who described the feeling of being watched at a ballot drop box, and the effect of the fear it generates among members of their groups.

Mesa resident Jenea Phillips testified that when she dropped off her ballot outside the Maricopa County Juvenile Court on Tuesday, there was a car running in the parking lot facing her with a phone on the dashboard aimed at the drop box. She assumed it was filming her as she went to drop off her ballot.

“I was concerned that if this person was taking video or photos of me or my vehicle, what kind of identifying information would they have?” Phillips asked during her testimony. “I just got over all concerned that my anonymity was lost.”

With less than two weeks until Election Day, election and law enforcement officials have tried to reassure voters that they are taking these incidents seriously. Maricopa County Sheriff Paul Penzone announced Monday that he is dispatching deputies to watch polling locations from now through Election Day.

But the officers will only be able to do so much, Penzone said, because individuals are within their rights to assemble and film outside ballot boxes as long as they are farther than 75 feet away.

That is the issue Liburdi appeared to be grappling with Wednesday, as he tried to balance the rights of the drop-box watchers against the request to enjoin their activities. He referenced a similar court battle over the filming of police officers in Arizona that was blocked by a federal judge in September.

“Why, for example, would it be unconstitutional to prohibit somebody from filming a law enforcement officer and it would be constitutional for me to enjoin filming individuals dropping ballots off?” Liburdi asked.

He said he was concerned that any attempt to block groups from filming on a public sidewalk outside a voting center would infringe on their First Amendment rights to assemble.

Dora Vasquez, executive director of AARA, challenged Lucero’s argument that there is no link between Jennings and the Arizona activity. Vasquez testified that many social media posts by Jennings have encouraged and helped organize the activities of election watchers and are already having a chilling effect on the retired Arizonans she works with.

“We have two weeks left to educate these people, and we’re afraid that people just won’t vote,” Vasquez said.