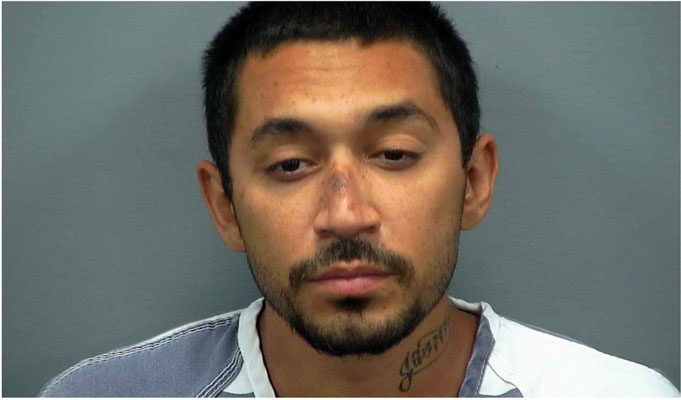 Contributed Photo/Courtesy GCSO: Eddie Trevizo, 28, was booked into the jail on charges of burglary and trafficking in stolen property.

SAFFORD – The victims of a burglary that resulted in the theft of a PlayStation 4 and two games assisted in collaring the alleged perpetrator.

Eddie Fabian Trevizo, 28, was arrested and booked into the Graham County Adult Detention Facility on charges of burglary in the second degree and trafficking in stolen property.

According to a Safford Police report, the theft of the game system and two games from a residence on 13th Avenue was initially reported at about 9:18 p.m. on Saturday, April 20. The officer responded to the residence, but finding nobody home and having other calls to attend to, left without interviewing the victims.

Later that night, the officer pulled over a vehicle the had left a known drug residence on Relation Street and came upon the victims of the earlier burglary armed with a Glock 22 .40-caliber handgun. The victims said they believed Trevizo had burgled the residence and they were searching for him. According to the victims, Trevizo had been allowed in the residence earlier and a neighbor later advised seeing him at back at the residence without any of the people who live there. The neighbor said Trevizo had a large backpack on when he left.

The victim also showed Facebook messages allegedly left by Trevizo indicating his desire to sell a PlayStation 4 and the two games.

The next day, one of the victims informed the police that she had called GameStop inquiring if anyone had attempted to sell a PlayStation 4 or the two games and the store indicated it had purchased the items the previous day.

An officer responded to the store and learned that Trevizo was captured on surveillance attempting to sell the items but was unable because he didn’t have current identification. Trevizo then had another person who was with him complete the transaction. The store employee said Trevizo was given $182.40 for the system and two games. The officer then confiscated the items and informed the victims they would get their stolen possessions back.

On Monday morning, an officer responded to the area near the Circle K at 1324 S. 1st Avenue after the victims had come across Trevizo.

The victims were located and said they saw Trevizo at the Circle K and confronted him about the burglary. Trevizo allegedly pulled out a knife and said if the victims came any closer he would cut them and then fled from the area. One of the victims advised he picked up a brick to protect himself and pursued Trevizo because he didn’t want him to get away.

Trevizo was seen running near some apartments on 16th Street and was later apprehended in the 1500 block of S. Central Avenue.

After initially denying burglarizing the residence or attempting to sell the stolen merchandise, Trevizo allegedly copped to the crime and said he had broken into the residence, taken the PlayStation 4 and two games and sold them at GameStop. He said he did so to get money to purchase drugs and that he no longer had the money.

Trevizo was then arrested and booked into the jail on the above-listed charges.