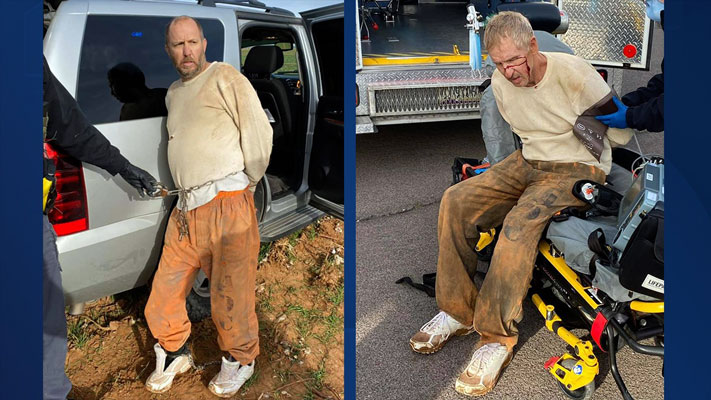 FLORENCE – Two inmates who escaped from Arizona State Prison Complex-Florence have been captured.

John B. Charpiot and David T. Harmon were captured at about 9 a.m. Thursday. The inmates were apprehended roughly 14 miles from the prison about 110 hours after escaping.

The inmates had escaped from a medium custody unit at ASPC-Florence on Saturday and reportedly attempted to rob a business in Florence the same day, according to the Arizona Department of Public Safety.

The Coolidge Police Department reported they received several calls from people who said they saw the escaped prisoners. Following up on the tips, Charpiot and Harmon were captured in a cotton field and arrested by Coolidge Police and U.S. Marshall’s officers.

During a joint news conference Thursday afternoon between the Arizona Department of Corrections, Rehabilitation and Reentry, and the Arizona Department of Public Safety, Col. Heston Silbert, AZDPS Director, thanked all the various agencies for their work in capturing the escaped inmates. He advised that more than 800 houses were searched during the course of the investigation and that law enforcement is still looking to find out where the inmates were during the time they were out.

“These were bad people we wanted to get off the street,” Silbert said.

U.S. Marshal David Gonzales advised that five of his marshals from Tucson were in Coolidge on a separate fugitive case when a call regarding a disturbance in a cotton field came over the dispatch. The marshals then joined Coolidge Police to encircle the cotton field and eventually apprehend the two escaped prisoners after TASER weapons were utilized.

After the escaped prisoners refused to follow officers’ commands, they were tased and taken into custody.

A reward of $70,000 was previously posted for assistance in the arrest of the escaped prisoners.

Charpiot, a medium-custody inmate, was admitted to prison in 2011 after being convicted out of Maricopa County to serve 35 years for molestation of a child and sexual abuse.

Harmon, also a medium custody inmate housed at the south unit, was admitted to prison in 2012 after being convicted out of Maricopa County to serve a total of 100 years for kidnapping charges and second-degree burglary charges.

Pinal County Sheriff Mark Lamb thanked all those involved in the capture of the inmates and the media for getting the word out on the situation as quickly as it did. He said that, coupled with the vigilance of the community

“They never got comfortable,” Lamb said.

Coolidge Police Department Commander Mark Tercero said a Coolidge citizen called and reported seeing the escaped prisoners. At that point, the marshals and officers switched from what they were scheduled to do and went to the cotton field. Tercero also thanked the media for helping get the information and pictures of the escaped inmates out to the public.

“Everybody dropped what they had to do and immediately went to deal with these individuals,” Tercero said.