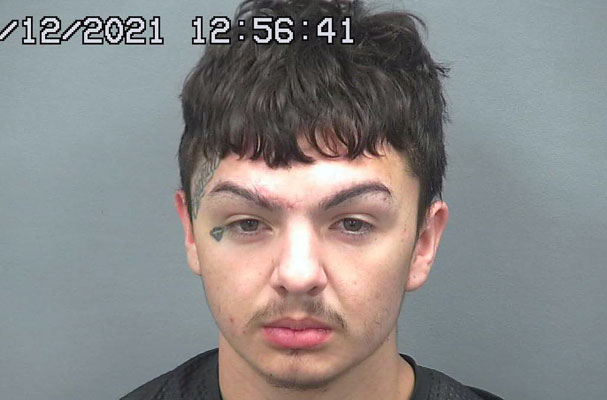 Contributed Photo: Raymone Aragon, 19, was booked into jail on a warrant regarding a petition to revoke his probation.

SAFFORD – Raymone Damien Aragon, 19, was arrested and booked into the Graham County Adult Detention Facility on Jan. 12 on a warrant regarding a petition to revoke his probation.

Aragon was on probation from a March 29, 2020 incident in which he reportedly stole a truck from a locked gate at Bowman Consulting and then fled from pursuing officers and burst through a closed fatality scene in Bylas, all while high on methamphetamine.

Authorities with the San Carlos Police Department and Arizona Department of Transportation gave chase as Aragon hit speeds near 100 mph and crossed over and nearly hit oncoming traffic multiple times. Officers successfully spiked the truck Aragon was driving and it crashed through a guard rail and went into the desert. Aragon then fled on foot but was soon caught.

Aragon was hospitalized for injuries sustained in the crash and a blood sample came back positive for methamphetamine and Midazolam, which is a sedative depressant commonly used under the direct supervision of a doctor to produce sleepiness or drowsiness and relieve anxiety before surgery.

According to online court records, Aragon ultimately took a plea deal and pleaded guilty to burglary in the third degree, unlawful flight from law enforcement, criminal damage, and DUI-drug.

Prior to the truck theft incident, Aragon had been arrested on another warrant in February 2020 after being treated at Mt. Graham Regional Medical Center for an apparent gunshot wound to his chest.

Aragon was placed on probation for the March 2020 incident, but only months afterward had a petition to revoke his probation filed in September 2020 for failing to adhere to its stipulations and failure to complete drug rehabilitation courses.

After dealing with that in November 2020, a second petition to revoke his probation was filed on Dec. 30, 2020, and another warrant was issued. He was then picked up on his warrant and made his initial appearance in court on Jan. 12.

Aragon’s next scheduled court appearance is a status conference hearing on Feb. 2 at 8:30 a.m.