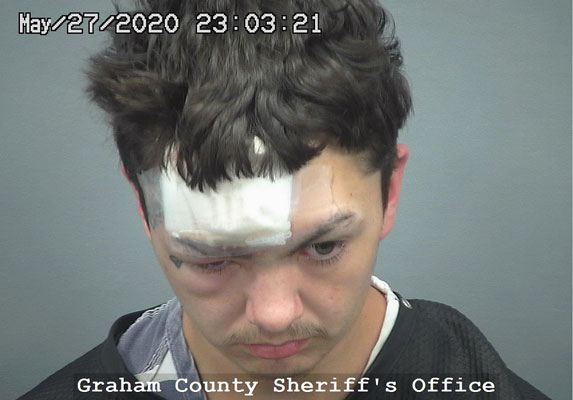 Contributed Photo/Courtesy GCSO: Raymone Damien Aragon, 19, was booked into the Graham County Adult Detention Facility after being released from a Scottsdale hospital.

GRAHAM COUNTY – Graham County prosecutors believe Raymone Damien Aragon, 19, stole a truck from a locked gate at Bowman Consulting in the early morning hours of March 29, fled from pursuing officers and burst through a closed fatality scene in Bylas all while high on methamphetamine. However, they now believe that he did not have anything to do with the pedestrian fatality as first thought by officers with the San Carlos Police Department (SCPD) and Arizona Department of Public Safety (DPS).

Aragon was bound over to the Graham County Superior Court on Tuesday, June 16, on charges of theft of means of transportation, burglary in the third degree, and criminal damage. Additional charges, including DUI-drugs, unlawful flight from pursuing law enforcement, and endangerment are liking pending upon review of DPS reports by prosecutors.

In the early morning of March 29, officers attempted to pull over a white, 2012 Chevrolet Silverado – allegedly driven by Aragon – as it raced westbound on U.S. Highway 70 through Thatcher at a high rate of speed. A police sergeant terminated the pursuit shortly after the suspect fled. It was later learned that the truck had been stolen out of the Bowman Consulting lot and its fence had been knocked down and damaged.

Meanwhile, the truck sped through the Bylas area and came upon an accident scene near the Bylas Bridge, where traffic was stopped due to a pedestrian fatality hit-and-run that was so violent that the victim’s torso had been separated from his legs.

According to reports from the San Carlos Police Department and DPS, and interviews from others stopped at the scene, the truck tore through the area, nearly missing several officers. While doing so, the officers believed they saw front end damage to the vehicle and possibly blood or body remains on the side of the truck and thought it might have been involved in the fatal hit-and-run.

SCPD  and DPS officers initiated a pursuit, as the truck, driven by Aragon, hit speeds near 100 mph and crossed over and nearly hit oncoming traffic multiple times, according to police reports.

At around milepost 274, SCPD officers successfully spiked the truck and it crashed through a guard rail and continued into the desert. The truck finally came to a stop and Aragon fled on foot but was quickly apprehended.

Aragon suffered lacerations to his forehead, right eye, face, and both legs in the collision and was flown to Honor Health Scottsdale Osborn Medical Center, where he was intubated and placed in the hospital’s intensive care unit. It was later discovered that Aragon was not involved in the fatal hit-and-run and only attempted to travel through the cordoned-off scene.

While incapacitated at the hospital, a warrant for his blood was approved and he was served while still unconscious. His blood was then taken for testing purposes and later came back positive for methamphetamine and Midazolam, which is a sedative depressant commonly used under the direct supervision of a doctor to produce sleepiness or drowsiness and relieve anxiety before surgery.

Aragon is scheduled to be arraigned in Graham County Superior Court on Tuesday, June 30, starting at 8:30 a.m.