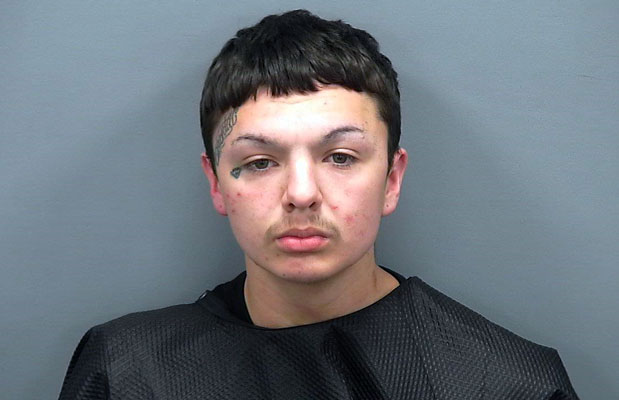 Contributed Photo/Courtesy GCSO: Raymone Aragon was found to have a gunshot wound to his chest when he was arrested on a misdemeanor warrant.

SAFFORD – A man suffering from an apparent gunshot wound to his chest from the previous day was arrested and booked into the Graham County Adult Detention Facility on Saturday, Feb. 15 after being medically cleared.

Raymone Aragon, 18, was arrested on a misdemeanor warrant at about 1 p.m. after he was located in a vehicle that was pulled over for a traffic stop at the intersection of U.S. Highway 191 and E. Lonestar Road.

Upon his arrest, he informed the officer that he had a wound on his chest that he had got by picking at his skin and accidentally nicking an artery. He said he had gone to Mt. Graham Regional Medical Center the previous day and they had bandaged the wound.

Once they arrived at the jail, medical staff inquired about the wound and said Aragon would have to be medically cleared by the hospital before he could be booked.

The officer then questioned Aragon more about the wound and the suspect allegedly advised it was actually a gunshot he received while at an altercation in the Phoenix area. He said he was with his friend “Reaper” and another friend when the car they were in was cut off by another car. Aragon said “Reaper” followed the offending car to a gas station and an altercation ensued in which a man from the other car pulled out a gun. Aragon said he stayed in his car and after he heard a gunshot he knelt down with his chest by the door. He said he then heard a second gunshot and lost his breath.

Aragon said everyone then left the gas station and “Reaper” later dug a bullet out of his chest with a knife.

Aragon was then taken back to Safford, and he went to the MGRMC, where he told them he had been digging at an abscess. Medical staff later confirmed Aragon had received treatment for his chest injury and that they asked multiple times if it was a bullet wound but Aragon denied it.

Aragon refused to offer any more information regarding the incident in the Phoenix area or name who else was in the vehicle at the time. An officer contacted various police departments in the Phoenix area but none had any reports of shots fired on the day in question.

After being released from the hospital Aragon was taken back to the jail and booked on his warrant.