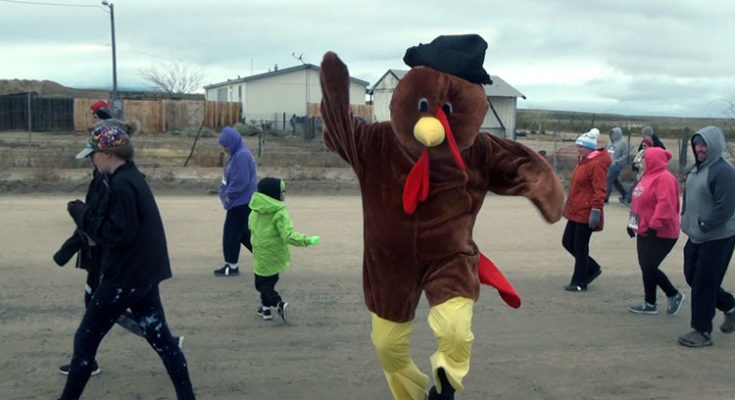 Jon Johnson File Photo/Gila Herald: Tom Turkey (Brian Paull) makes his way through the course. The time is now to sign up for the 15th annual Pima Turkey Trot to be held on Thanksgiving Day.

PIMA – Before Thanksgiving revelers fill their bellies, make some room for the tasty fixings by participating in the 15th annual Pima Turkey Trot.

The event takes place Thanksgiving Day, Thursday, Nov. 26, and begins with a 1-mile Fun Run at 8 a.m. at the Pima Vard Lines Memorial Roping Arena, followed by the 5K at 8:45 a.m.

The Trot has become a family tradition to numerous people in the Gila Valley and brings in extended family and friends from outside of the area as well. The annual event began in 2006 when race co-directors Melinda Nelson and Cody Marshall thought a 5K on Thanksgiving would be a good way to rationalize eating a feast later in the day. Last year, the Trot had 778 registered but the harsh weather conditions ended up having only 383 finish the race.

“I’m just glad people came,” Nelson said. “Last night, I was packing up and thought ‘we’ll see who comes’, but we had a great turnout . . . It’s still a great Thanksgiving day with snow on our mountain. We’ve got lots of good help out here and we hope it all goes well while they are out there running.”

The overall male and female winners are awarded $50 and a medal, while medals are also given to the top three finishers in each age category, male and female. There are also various raffle drawings and prizes donated by the race’s various sponsors. A turkey will be given to the family with the most registered participants.

Normally, the course goes over dirt and paved roads and then into a cross-country path for the 3.1-mile distance, but due to the heavy rains and muddy course last year, the route was changed to a there-and-back course along the paved road.

The result was race records in both the overall male and female categories that blew away the previous records. Jonathan Barney, then 15, of Scottsdale, finished first in a new course record of 16:01.61.

“It was good,” Jonathan said. “It was nice and cool out. The wind was a little bit annoying, but it was good . . . I like that it was on a road instead of the muddy fields.”

On the female side, Paige Morales, then 20, of Morenci repeated as champion and knocked off more than 43 seconds from her 2018 first-place finish as she zoomed in with a time of 19:16.59.

It’s not all about who finishes first, however, and groups of families join in on the fun to run with each other and see extended family. The family with the most participants is also rewarded with a turkey. Nelson said she loves to see the evolution of the number of people in a family participating from the start of just one member who perhaps likes to run going the first year, to the entire family joining in during subsequent years.

“You wouldn’t think taking home a frozen turkey would be that exciting, but people get pretty excited about being the biggest family there, so we like to see that,” Nelson previously said.

Registration is available online here and is just $10 until Nov. 17, after which registration will be $15 through race day, so get in early to save some dough. Early packet pickup will be Wednesday, Nov. 25 at the Pima Schools Cafeteria at the corner of Main Street and 200 South from 3 – 7 p.m. Please wear a mask for pickup.

All the proceeds from the event are donated to Pima Schools and throughout its history, the event has donated more than $80,000.