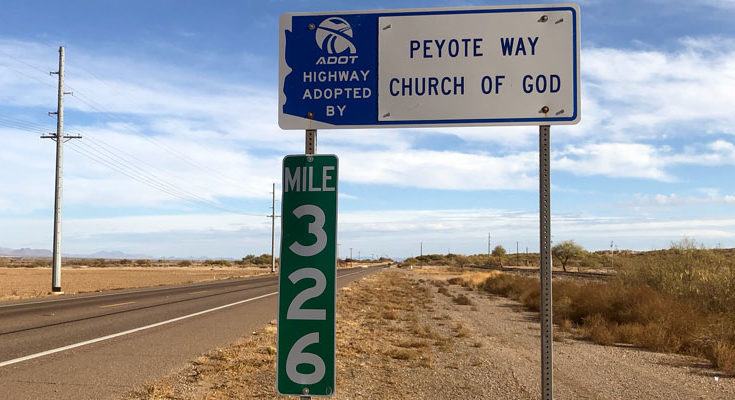 Jon Johnson Photo/Gila Herald: No, you aren’t seeing things while traveling on U.S. Highway 70 west of Pima, the mileposts jump from 314 to 326 as you head eastbound and decrease from 326 to 314 for westbound motorists.

Pima – If you drive east from Fort Thomas on U.S. Highway 70, casually observing the milepost markers along the road, don’t be surprised if you occasionally feel like you’re moving faster than you think.  You may believe you are just tired, or you have missed something along the way.

Motoring east past milepost (MP) 313, then past the turnoff for Klondyke Road, you will see MP-314, and a minute later, you are at MP-326. Whoa! Were you asleep at the wheel, or perhaps, daydreaming? Did you just imagine what you saw? Should you stop in Pima for a cup of coffee or to stretch your legs? Next trip you resolve to look again and see if you were right.

If you let your imagination run free as you drive, perhaps you are in a twilight zone, where Geronimo still rides, pursued by a squadron of Buffalo Soldiers and Apache scouts on certain moonlit nights. Maybe there is a dark secret waiting for us to discover. As we ponder this anomaly with greater practicality, we could speculate that someone ordered the MP signs wrong and forgot to order MP-315 to 325, and the road crew just put them up as they came out of the box.

You might surmise that they started putting up the signs from the New Mexico border near the old Franklin Arizona Department of Transportation (ADOT) truck inspection station and realized they made a mistake when they got around Pima, Arizona. That would be similar to the 150-year-old Transcontinental Railroad meeting in the middle of the desert at Promontory Point, instead of a convenient spot like Salt Lake City or Logan, Utah, for example. But no one drove a golden spike at MP-315 or MP-325; they just left us with 12 “ghost miles,” to spur our curiosity or confusion. It is entertaining to speculate.

The ADOT mileposts actually do jump from MP-314 to MP-326 in both directions on U.S. Highway 70. ADOT knows about this, and the maps you find on AZ511.com clearly show the milepost numbers as they are on the road. So, what you saw is really what you saw.

We asked the folks at ADOT if anyone currently at the Safford Office remembers how this happened. According to ADOT Southeastern District Engineer Bill Harmon, the mystery gap is called an “equation,” and it was no mistake. Prior to the 1950s, U.S. Highway 70 took a different route that was 12 miles longer, taking a path south of San Carlos Lake following what is now Calva Road on the San Carlos Reservation, just west of Bylas.

In the 1950s, the Gila River Bridge at Bylas was built, enabling ADOT to create a shorter route to Globe, which saved motorists 12 miles of travel on what we now recognize as U.S. Highway 70 between Bylas and San Carlos. The milepost markers received a needed correction, and it was placed near Klondyke Road to kind of “jiggle the books,” as Harmon called it, in order to correct the mileage to the New Mexico border. This 1950s bridge recently underwent improvements to bring the crossing up to current engineering standards.

If anyone rides the “Ghost Miles,” they do it on Calva Road and not at MP-314.

U.S. Highway 70 has an interesting history. It was originally designated the Lee Highway, running from Beaufort, North Carolina to Holbrook, Arizona, where it met with the storied Route 66. The name Lee Highway, like the Northern coast to coast route, the Lincoln Highway (later designated U.S. Highway 30) paid tribute to the two great heroes of the Civil War, Abraham Lincoln and Robert E. Lee. For a time in its history, as U.S. Highway 70, it ran all the way to Los Angeles, terminating at the junction with U.S. Highway 101. U.S. Highway 70 was once billed as the “Broadway of America.” In 1951, it was promoted as the “Treasure Trail” by the U.S. Highway 70 Association.

Over time, the U.S. Highway 70 was paired with other routes, such as U.S. Highway 60. It currently starts and stops at various points, with some stretches fading into history. Due to numerous realignments and the creation of the Interstate Highway System, driving the original routes of U.S. Highway 70 across the United States may be far more formidable than tracing the more famous “Route 66.”

U.S. Highway 70 also appeared on the Silver Screen. Robert Mitchum’s Thunder Road (1956) memorialized the highway’s history as a moonshiner delivery route through Tennessee. A song called “The Ballad of Thunder Road,” written for the movie by Robert Mitchum and Don Raye enjoyed some success hitting the Billboard Magazine Hot 100, in 1958 and again in 1960.

Robert VanBuhler is a member of the Graham County Historical Society and a retired telecommunications engineer. He resides in Safford.