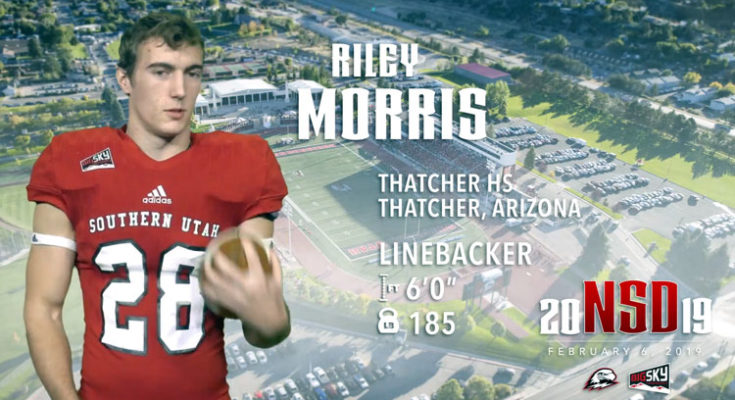 CEDAR CITY – Utah will be receiving one of the Gila Valley’s finest as Thatcher’s Riley Morris has signed to play football for the Southern Utah University (SUU) Thunderbirds. The change from Eagles to Thunderbirds will have to wait a couple of years, however, as Morris plans on completing a mission for The Church of Jesus Christ of Latter-day Saints prior to reporting to SUU. He won’t receive his mission call until this summer.

Morris and his parents visited SUU in Cedar City, Utah last weekend and were sold.

SUU released a promotional video Wednesday announcing Riley’s signing. In the video, it lists that he will play linebacker for the Thunderbirds on defense.

Riley is a three-time state champion and was named 2A All-State Player of the Year by the . He played multiple spots his senior year at Thatcher and was one of the Eagles’ main threat running backs while excelling as a hard-hitting linebacker and a dangerous returner and stopper on special teams.

Riley told the Gila Herald that he hopes to excel in the linebacker position and on special teams and that he hopes to help increase the wins for a team that went 1-10 last year. He also said he should have help because of a great new recruiting class.

“I feel like I could make a big difference there,” he said. “I think I can bring like a championship mentality . . . The recruiting class that went up there was big and full of talented people. I feel like we’ll do pretty good once we get there and start to put in the work.”

The Thatcher Eagles football program has gotten some notoriety around the state and further as of late with their third straight state championship and various players have received multiple offers to play at the next level.

Riley also thanked his parents and family for attending his games, as well as his teammates and coaches.

He thanked his coaches for “helping me learn the ropes all through my years and getting me stronger and getting ready for this opportunity and just making me the man I am today.”