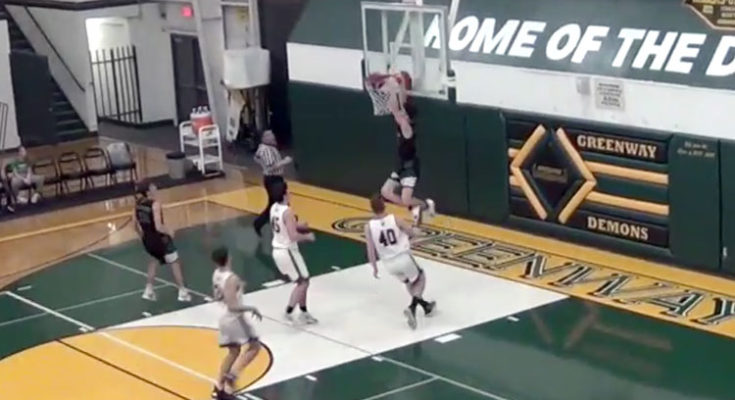 Thatcher’s Rulon White gets the dunk for Thatcher’s last points, but it was the No. 1 Scottsdale Eagles who slammed the door on Thatcher’s championship hopes.

PHOENIX – Thatcher’s journey toward a 2A State Basketball Championship ended in Phoenix on Friday afternoon, as the No. 4 Thatcher Eagles fell to the No. 1 Scottsdale Christian Eagles in the first semifinal game, 62-46.

Having to battle the weather, uncertainty, and then what basically equated to a home advantage, Thatcher got down early and couldn’t come back against the top seed in the 2A State Basketball Tournament.

The teams had waited to travel to the previously scheduled arena at the Findlay Toyota Center in Prescott Valley because of the winter storm. After the Arizona Interscholastic Association postponed games in Prescott due to the weather, a conference call was made and both Thatcher and Scottsdale Christian agreed to play their game at Greenway High School in Phoenix.

Scottsdale Christian came out like a team that didn’t have any travel worries and had its inside/outside game working as Ethan Spry hit from point-blank range followed by a 3-pointer by Jordan Moody. Scottsdale then got three offensive rebound put backs to open up an 11-0 lead with 3:56 remaining in the first period.

Spencer Stevens broke the ice for Thatcher with a rebound put back, and followed that up with a 3-pointer, but those were the only points for Thatcher in the period and Scottsdale was up 16-5 at the end of the first period.

Thatcher began tightening its defense in the second period and getting more defensive rebounds while its offense began clicking as well. Cole Motes started playing big and hit for eight points in the period as he scored on drives and offensive rebounds. Kason Crosby was also instrumental in the comeback, getting the ball to teammates in scoring position and hitting four points of his own in the period. Stevens hit a big 3-pointer and had another bucket to score 10 points in the first half as well.

When the dust settled, Thatcher had clawed its way back into the game and was down only six, 30-24, at the half.

The third period appeared to start the same for Thatcher as Scottsdale built up a 37-24 lead in the first half of the period. Thatcher came roaring back as Crosby hit a straightaway 3-pointer, followed by a turnaround jumper in the lane by White. Motes then stepped in front of a pass and took the steal coast-to-coast and finished with the layup to cut the lead back to nine, 40-31.

However, that was Thatcher’s only three field goals in the period and Scottsdale then went on a 9-0 run led by Jordan Myers to push the lead to 18 by the start of the fourth with Scottsdale up 49-33.

A bright spot in the period was the scoring of White, who hit five of the team’s six field goals – including a beautiful dunk with 16 seconds left in the game – and finished with a team-high 15 points. Motes and Stevens finished with 10 points apiece, Crosby had eight, and Palmer three.

Scottsdale Christian will now face No. 2 Alchesay in the championship played Saturday at Highland High School in Gilbert, starting at 6 p.m.