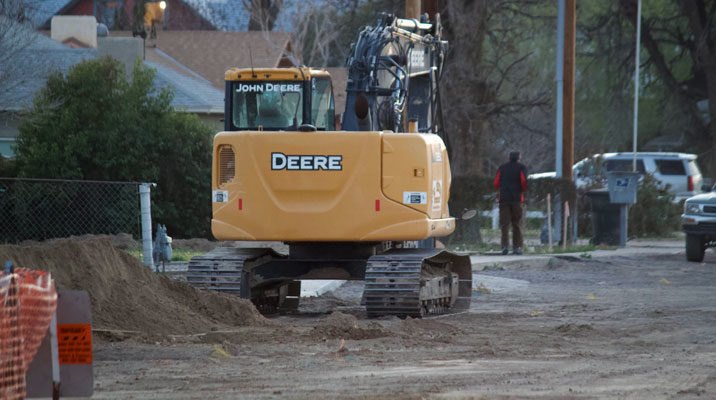 THATCHER – While the road currently resembles what one would expect to find in bombed out Beirut, conditions on Church Street will still get worse before they get better. However, once complete, the new street will be the diamond in the tiara of Thatcher’s streets and, by utilizing a HURF swap to exchange federal funds for state money, the town could save roughly $500,000 in the process.

It was just six months ago when Thatcher Town Manager Heath Brown had to break the news to the Thatcher Town Council that the federally-funded project’s projected cost had risen from $2.3 million to $2.8 million, and Thatcher would have to pony up an additional $30,000 for its match. The Arizona Department of Transportation-backed project is set to be a complete rebuild of Church Street from U.S. Highway 70 to Stadium Avenue and includes widening the street, new sidewalks, curbs, and gutters, with asphalt from curb to curb.

The plan also features parallel parking and bicycle lanes on both the southern and northern sides and will create a roundabout at the intersection of Church Street and Third Avenue.

At the Thatcher City Council meeting Monday night, Brown informed the council that by utilizing a HURF swap where the state keeps the federal money and instead provides state money for the project, the town could save upward of $500,000 by being able to bypass ADOT oversight and manage the project themselves.

The swap also benefits the state because it takes 10 percent off the top of the money to be swapped. So, that means the state will make about $280,000 right off the bat to exchange the federal funds for state funds.

However, Brown said the change would allow the town to oversee the project itself instead of ADOT and would be in charge of bidding a contractor.

Brown said with the HURF swap, if the bids come in according to the estimate, the town will gain $162,000 instead of paying $100,000 if it had stayed with the federal program alone.

Additionally, by going with the state money, Brown said the town will have much more flexibility if they decided a change to any aspect of the project is needed. The town also has its pick of any qualified contractor who fills out a bid and opens up the bidding process to more contractors, including making it easier for local contractors to bid.

“It really is substantial on the cost side,” said Town Engineer Tom Palmer. “Just getting all of those feds out of the middle of our town would be awesome.”

The project has faced some delays as the Safford water project that replaced more than a mile of 12-inch diameter pipe and 1,615 feet of 4-, 6-, and 8-inch diameter water mains had to change contractors and has just finished in the new road’s construction zone. Originally, the water project was supposed to have started in July and finished by December 2018. At times complaints about messy sections of the due to the water project were reported but Council Member Ryan Rapier put the issues in perspective.

“Mother Nature has not exactly played ball in this section of time either,” Rapier said. “So, I mean, kudos for everyone who is doing what they’re doing because we knew it was going to be bad. It’s been worse than we thought, but, we all knew we’d have to get through it. Good on everybody for doing what we need to do, especially in light of how bad the weather has been.”

At Monday’s meeting, Brown reported the water project still needed to finish up on the west side that is out of the range of the Church Street renewal project and afterward would do chlorinating and pressure testing prior to connecting the new water main to the system.

Brown said he hopes to have a new intergovernmental agreement with ADOT regarding the HURF swap by April and will look to bid the project in July, which would be a month earlier than they previously expected to do the federal bid.