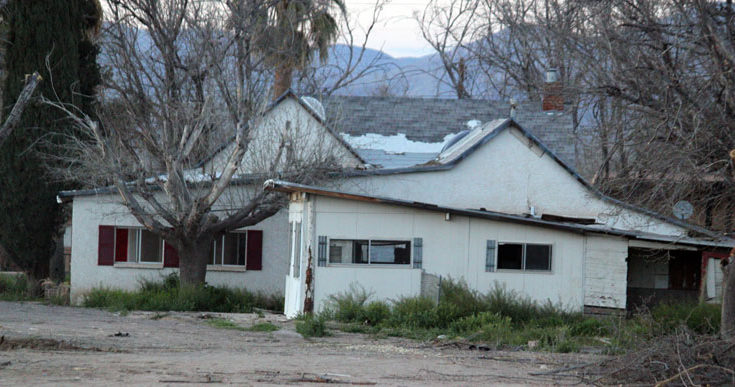 Jon Johnson Photo/Gila Herald: This last remaining structure at the Red Lamp Mobile Home and R.V. Park will be utilized for fire practice during a controlled burn Saturday, April 13.

THATCHER – A year after striking a deal to purchase the dilapidated Red Lamp Mobile Home and R.V. Park for $1.2 million, the town of Thatcher will continue to clear out and clean up the 4.5-acre property.

According to Thatcher Fire Chief Mike Payne, the Thatcher Fire Department will utilize the last standing building – a single-family residential structure that served as the park’s office – for fire training and the department will hold a controlled burn Saturday, April 13.

“As soon as he (Payne) burns it, we’ll get a bunch of crews in there and clean that burn mess up, get that pool out and the restroom,” said Thatcher Town Manager . “We’ll basically do our final (cleanup and) get it looking really nice so it’s more presentable when we try to market it.”

While the town agreed to the sale price in April 2018, the sale actually didn’t close until July 2, 2018, to avoid any chance of the town going over its expenditure limitation for the fiscal year.

The Thatcher Town Council made the decision to purchase the park to clean it up and have better development. Mayor Bob Rivera previously described the park how it was as an eyesore along the commercial highway corridor and that the area with its run-down trailers was a drain on the town’s resources, including policing as officers were called to the property “at least once a week if not more,” Rivera said. He also pointed out several other hazards, including trailers with electrical problems, and the propensity for any fires to easily jump to adjoining trailers.

That exact scenario then occurred in May 2018, when a trailer caught fire and jumped to two adjoining trailers. The fire could have left the park and started other homes on fire as well if it weren’t for low winds and the diligence of the Thatcher Fire Department, which was assisted by the Safford Fire Department.

Less than a handful of the resident’s in the park were permanent residents and most were month-to-month and rented the trailers. For those who owned their own trailers, the town gave them until November to remove the trailers from the site. The town then contracted with a recycler to break down the remaining trailers and haul away the recyclable material and debris.

When the last building is cleared away, the town will finish cleaning up the property and then begin offering it or parts of it for sale to developers. Ideally, the town prefers to have commercial businesses along the highway frontage and perhaps single-family homes along the southern end of the property adjacent to Fourth Street.

Previously, Rivera has expressed his desire to entice a drug store to set up shop on the corner of Third Avenue and U.S. Highway 70, where there is already a traffic light. He also said the town would lie to bring in a new outdoor mini-mall for the property if possible.