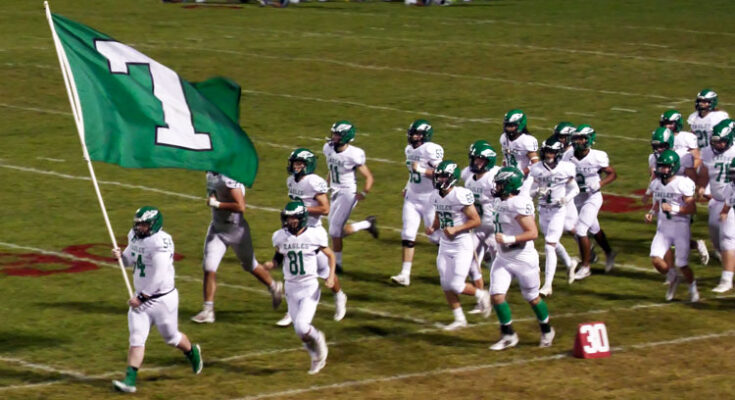 Eagles remain unbeaten atop 3A South

After Thatcher built a quick 21-point lead in the first quarter, Sahuaro scored twice to cut it to 14-21 with just 44 seconds left on the clock until halftime.

The Cougars had just pushed the Eagles’ offense back for the first time all game and momentum was on their side. Yet again, 44 seconds can be an eternity to some.

Thatcher ended up scoring a 5-yard TD pass from Brandon Napier to Tanner Rios on the last play of the half. So, instead of being up only seven and then kicking back to Sahuaro to start the second half with the chance they could tie, the Eagles doubled up the Cougars 28-14 at the break.

Thatcher then continued that momentum into the third quarter, which they owned. After forcing a punt on Sahuaro’s initial possession the Eagles scored three straight TDs to put the game out of reach. Thatcher ended up with a mercy-ruled running clock with about 9 minutes left in the fourth quarter and left Tucson with the victory, 57-14. With the win and Sabino’s loss to Pusch Ridge, 20-41, Thatcher now sits alone atop the 3A South, as well as being the overall No. 1 ranked team in the 3A Conference.

“We started off really well then we kind of lulled in the middle,” said Thatcher head coach Dan Jones. “We want to try and iron that out, but we played well tonight.”

That’s awfully nice speak from a coach whose team scored eight touchdowns on nine real possessions with no turnovers and that “lull” adding up to just one punt in the second quarter. But yet, he wasn’t so far off either.

The Eagles were all over the Cougars from the start, with Cody Jones breaking the ice on the game’s first play from scrimmage with a 55-yard TD run to set the tone for the night. Cody would go on to score three TDs and have a big night on defense.

After stopping Sahuaro on downs, the second offensive series belonged to Ayden Bingham, who had some big runs to give Thatcher a 1st and goal from the 8. The Eagles kept feeding him, and Bingham responded by taking it in for the first of his two scores on the night.

“Our running back coaches teach us (to) find a lane – do our thing kind of, so I just went out there after halftime and made a realization and went and scored,” Bingham said.

Koye Farris had a good punt return to set the Eagles up at the Cougars’ 40-yard line and Napier worked his magic on the ensuing play. After finding nobody open to throw to, Napier danced in the pocket and then took off as he is known to do. He made a couple of would-be tacklers miss and then reversed his field and raced into the end zone, diving past the last man to beat. Unfortunately, a referee called a block in the back at the goal line (even though the defender was clearly hit in his chest) and the points came off the board. Two plays later, however, Cody Jones ran it in from 17 yards out and Sahuaro was in trouble down 21-0.

The Cougars responded with their air attack from QB Angel Hightower, who hit receivers for big third- and fourth-down conversions.

Sahuaro got on the board when Daniel Cruz took a shovel pass from Hightower. Cruz was met at the goal line and was separated from the ball, however, Sahuaro’s Christopher Apalategui recovered in the end zone for the score.

The Cougars then pushed the Eagles’ offense back for the first time on the night after a blown play resulted in a sack and the Cougars blew up a screen pass on third down.

Sahuaro got the ball back on Thatcher’s only punt of the night and worked it into the Red Zone as halftime approached. After converting a big fourth down to Dylan Thomas, Hightower hooked up with Thomas again for a short scoring pass to cut the lead to 14-21 with just those 44 seconds left until halftime.

The Eagles’ defense dominated the third quarter and forced two punts and two turnovers, including a Napier INT.

Thatcher’s offense continued to click, and a third running back, Koye Farris, got his number called and answered with a 62-yard TD off a pitch from Napier.

Bingham scored his second TD on the night – a 25-yard run – and Napier’s INT set up Jones for his third TD – also a 25-yard run.

The Eagles then capped the night off early in the fourth quarter as Napier hit Damien Oriero in stride and the receiver brushed off a tackle and scored a 40-yard TD to give Thatcher a 57-14 lead and start the mercy-rule running clock.

“It’s what our team is supposed to do,” Bingham said. “We’re on track to go take state, hopefully, so, I mean, it’s what we’re supposed to do.”

Coach Jones was perhaps slightly more diplomatic in his reply.

“It was wonderful to go 6-0 and we’re looking to keep going,” coach Jones said.

Thatcher (2-0 region, 6-0 overall) will next host Benson at EAC’s John Mickelson Field on Friday, Oct. 7, starting at 7 p.m. The Eagles will then travel to face Coolidge on Oct. 14 prior to its all-important last home game against Sabino on Oct. 21. Thatcher finishes the regular season on the road at (Tucson) Palo Verde Magnet on Oct. 28.

In 2A, No.1-ranked Morenci defeated Globe 56-0. The Wildcats will next travel to face San Tan Charter on Friday, Oct. 7, starting at 7 p.m.