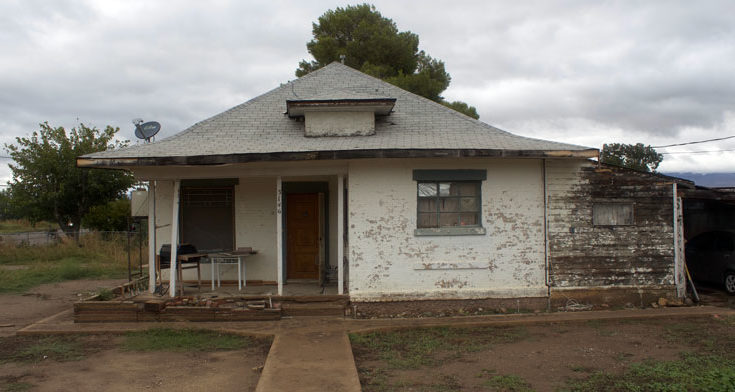 Jon Johnson Photo/Gila Herald: Owner Tom Palmer wants to raze this 88-year-old home and build a duplex in its place but current zoning regulations won’t allow for it.

THATCHER – A request to rezone a northeast corner of Church Street and Second Avenue drew a strong rebuttal from the surrounding community and pressed newly minted Thatcher Town Engineer Tom Palmer to remove his request from the Thatcher Town Council agenda Monday night.

While those opposed feared the rezoning would allow an apartment complex to be built next to single-family homes, Palmer said his intention was to simply build a one-story duplex that he could offer for rent at a reasonable price, perhaps to students attending nearby Eastern Arizona College.

“I own a little lot that I was going to tear down an 88-year-old home and put up a duplex and somehow that turned into apartments and everything else,” Palmer said. “I bought it four years ago or something with the intent of ‘let’s tear it down and put a little rental there.’ I live two doors down.”

Palmer currently rents the home but it appears to be in a dilapidated state. The rental opportunity would increase in value if a duplex was allowed on the lot.

Palmer said with the location being so close to EAC, affordable starter homes or rentals are in need in the area.

“Next to the college, I think we need some affordable housing for younger families,” Palmer said. “I’ve got two daughters who are about to get married. Where are they going to live? They can’t afford a big house.”

After a spiritous debate during Thatcher’s Planning & Zoning Commission meeting last week, the commission voted 5-1 to decline Palmer’s rezoning request. Palmer previously served on the commission but had to give up his seat when he was hired as the town’s new engineer.

While the Planning & Zoning Commission’s ruling is only a recommendation and the decision to rezone lies solely with the Thatcher Town Council, Palmer decided he did not want his first meeting to be mired in the same arguments he already went through at the commission’s meeting and withdrew his request.

One of the opponents to the zoning change has a lot one block east at the corner of Church Street and First Avenue that is zoned heavy commercial C-2 and has numerous shipping containers stacked up right next to single-family housing. Ironically, the C-2 zoning that the shipping container storage facility lot has would allow the owner to build an apartment complex right next to the current single-family home that is directly south of the property.

Town Manager Heath Brown looked into the matter and believed that the town’s zoning code might be the real culprit and that what really needs to happen is to have an additional available zone that falls between single-family housing and multiple-housing (R-3 and R-4) that allows for two-story and three-story apartments. Brown said really the biggest hurdle to allowing the current R-3 and R-4 zoning is fitting all the requirements regarding parking, drainage, and open space requirements.

Brown advised the council that perhaps a multi-family zoning that would allow duplexes but not apartments would be a nice buffer between single-family homes and large multi-family or commercial lots. The council gave Brown direction to look into such a new zoning and to bring it back to the council for discussion and possible action.

Meanwhile, two blocks away from where Palmer wants to build a duplex, the remnants of the Red Lamp Mobile Home Park sits in a C-2 heavy commercial zone because when it originally went in that was the zone that was required for a mobile home park, although mobile homes are currently not allowed in C-2 zoning. Multi-family is allowed in C-2 zoning, however, as long as it doesn’t have highway frontage, meaning apartments could be built on Church Street along the entire block of the Red Lamp Mobile Home Park – which the town now owns – without any rezoning at all.

Brown said while the community expresses its desire to be a college town and reap the benefits it has issues with other aspects that entails.

“It’s always ‘we like the college and we need to provide affordable housing for college students and newly married couples just not next door to me,’” Brown said. “I’ve seen it multiple times (with) people coming in wanting to do something like that. And they (neighbors) are ok with it somewhere else, just not right next to them.”

Brown said he should have a new zoning regulation for the council to review by next month and perhaps have it on the council’s agenda for approval in December or January.

Palmer said the thought of a new zoning regulation that allows duplexes but not apartments just may be the ticket to bridge the gap between those who were opposed to his previous rezone request.

“I’m glad to hear Heath mention that,” Palmer said. “Maybe another zoning category would eliminate the scare tactics of apartments and focus on what we really wanted.”