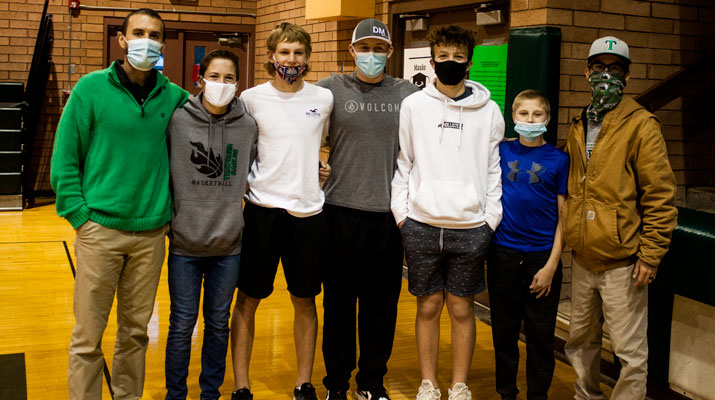 THATCHER – It happened in a split second.

With mere minutes before certain tragedy, a group of Thatcher Middle School basketball players and their coach sprung to action and helped save Summers’ life, giving him and his family a bit more to be thankful for that holiday.

Summers told the Gila Herald that he was extremely fortunate that the situation occurred while he was at the school as he often goes for runs or bicycle rides by himself and if it had occurred then, more than likely he would have died.

“Even if it would have happened at home, they probably wouldn’t have saved me in time,” Summers said.

When Summers collapsed, eighth-grade basketball coach Luke Ochoa immediately came to his aid, along with students Justin West, 14, Wally Haller, 14, Brett Jones, 13, Wyatt Nicholas, 13, and Branson Hughes, 14. As Ochoa began to perform cardiopulmonary resuscitation (CPR), West went and called 911, while Nicholas gathered up the gym’s Automated External Defibrillator (AED) machine, and Haller and Jones helped Ochoa with Summers. Nicholas and Hughes then operated the AED machine through prompts by the machine and from instructions by the 911 operator.

The players knew right where the AED machine was kept, they’ve noted it before, ever since their classmate 11-year-old Julie Hancock collapsed while running during track practice two years prior. Despite a valiant effort by coaches and emergency personnel, Hancock wasn’t able to be saved from her heart condition.

“She’s my neighbor, so I heard her (mom) talk about it and I would just make a mental note that it (AED) was there every day,” Hughes said.

“Those boys were on the track the day that Julie fell and wanted to help but didn’t know what to do,” Susan Hancock told the Gila Herald. “Fast forward a year, same boys, feet away from where it happened the first time, but this time they sprung into action and saved their coach. These boys still have some things they are dealing with due to being involved in two sudden cardiac arrests so close together but this story is special.”

Nicholas said everyone acted fast and did their part to help the coach.

“It kind of just happened real fast and you just go with the flow,” he said.

“We shocked him again and I was pumping his chest some more and then he kind of started breathing on his own,” Ochoa said. “After that, we had some parents that came running in who was a nurse and she helped out and took control of the situation.”

Summers was transported to Mt. Graham Regional Medical Center and was then flown to a Tucson hospital for treatment. A device was implanted in his heart to help regulate it, according to his wife, Stephanie Summers, but doctors are still examining him to see exactly why the cardiac arrest occurred.

Thatcher Schools Superintendent Matthew Peterson praised his district for purchasing the various AED machines throughout the campuses and said the schools will institute training on them for the student body when school starts back up after the winter break.

“K-12 students – within the first two weeks of January when we come back – will be trained on the AED,” Peterson said. He added that it will be included in normal emergency protocol training – such as what to do when a firearm goes off – with middle school and high school students receiving more thorough training on the use of the machines.

Peterson and Thatcher Police officer Jimmy Whisman, who responded to the scene the day of the incident, praised the students for their actions.

“To hear the stories about what these kids with little to no training were able to do was pretty cool,” Whisman said. “They’re true heroes.”

“They’re just a good group of kids and it’s because it’s a good community,” Summers said. “There’s a lot of people doing what they’re supposed to be doing here and I’m just grateful to be just a little part of it.”