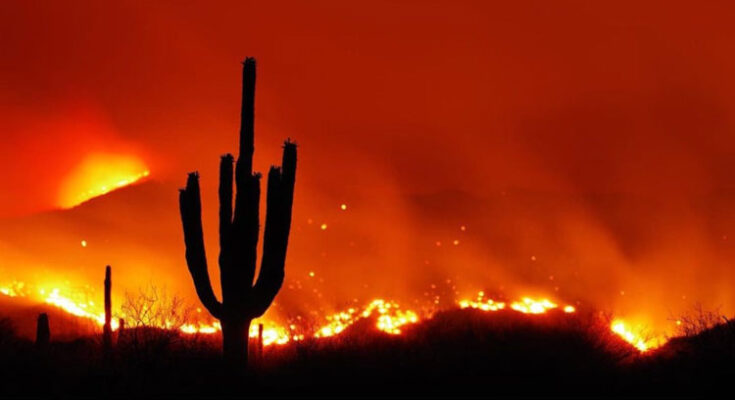 Contributed Photo: The Mescal Fire and Telegraph Fire have both burned more than 30,000 acres each and have forced thousands of evacuations.

The Mescal Fire has burned 38,702 acres as of Sunday afternoon, jumping from about 8,000 acres on Saturday at the same time. The fire is listed at just 2% containment. U.S. Highway 70 remains closed to heavy traffic (semis) from Fort Thomas to Globe, however, it is open to light traffic.

The following communities have been informed to evacuate:

Additionally, the following communities have been placed in the “SET” phase and should be prepared to evacuate:

The Mescal Fire began June 1 about 12 miles southeast of Globe and its cause has not yet been determined. On Sunday, burnout operations were conducted.

The fire crossed 600 Road (Old Coolidge Dam Road) and pushed toward Route 3 over Hog Mountain. Firefighters continue to attempt to keep the fire from moving through the San Carlos High School area. Air tankers and helicopters are being utilized extensively in support of ground operations.

Evacuations have been ordered for Top-of-the-World as the Telegraph Fire grew to more than 34,300 acres as of Sunday.

According to an update on InciWeb, the fire was burning less than 1 mile from the Top-of-the-World area, which is between Superior and Miami. The town of Superior is in the “SET” mode, ready to evacuate at a moment’s notice.

The Red Cross has set up an evacuation center at Lee Kornegay Intermediate School at 4635 Railroad Ave. in Miami and at Skyline High School in Mesa.

A large animal shelter is available at the Birch Stockyard at 2822 N. Highway 188 in Globe and the Apache Junction Rodeo grounds, according to the Pinal County Sheriff’s Office.

U.S. Highway 60 is closed from Superior to Miami due to the fire, which began June 4 at about 1:30 p.m. The cause of the fire is still under investigation.