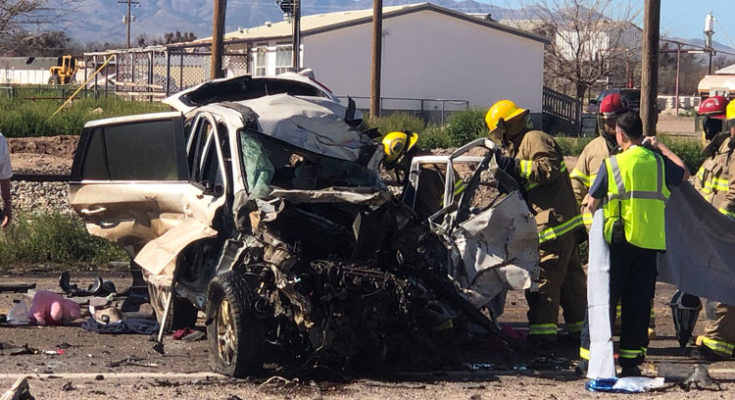 Jon Johnson Photo/Gila Herald: The driver of this Hyundai Santa Fe was killed after she attempted to pass in a no-passing zone on U.S. Highway 70 on Sunday morning and collided with a CTI semi-tuck hauling sulfuric acid.

PIMA – A 23-year-old woman lost her life Sunday morning when she attempted to pass a truck pulling a horse trailer in a no-passing zone and collided head-on with a CTI semi-truck hauling sulfuric acid.

The woman, identified as Elizabeth Darlene Mary Dawson, of Surprise, was deceased at the scene and had to be extricated from her white, 2012 Hyundai Santa Fe SUV by members of the Pima Fire Department.

According to a release from the Arizona Department of Public Safety, at about 9:51 a.m., the Santa Fe was westbound on U.S. Highway 70 at about milepost 327.9 (near the Glenbar Gin) when Dawson attempted to pass a silver, 2008 Dodge Ram pickup truck driven by Kyle Collin Lackner, 31, of Safford, who was pulling a loaded horse trailer. As Dawson attempted to pass, she collided head-on with an eastbound red, 2015 Peterbilt semi-truck pulling a 2009 Polar tanker filled with sulfuric acid. The semi was driven by Ai E. Wallace, 57, of Safford.

After colliding with the semi-truck, the Santa Fe hit the horse trailer as well and came to rest in the westbound lane facing north. The Dodge and horse trailer came to a controlled stop along the northern shoulder and neither Lackner or his passenger were injured. Lackner later removed the Dodge from the scene.

The Peterbilt truck hauling the sulfuric acid left onto the southern shoulder and collided with an embankment and railroad tracks, damaging the the tracks. Wallace was helped out of the truck, and the cabin area then caught fire and burned to the ground. Wallace was transported to Mt. Graham Regional Medical Center, where he was treated for a broken leg and a head wound and released, according to the DPS report.

The tanker had minor damage but no sulfuric acid spilled. Another tanker later arrived and the sulfuric acid was offloaded safely. The remnants of the Peterbilt semi-truck was then towed from the scene, along with the original tanker.

Debris from the collision also careened into a nearby residence, damaging the occupant’s door and window.

The highway was closed for several hours due to the fatal crash and investigation, with through traffic being diverted to Bryce/Eden Road. The Pima Police Department, Graham County Sheriff’s Office, and Arizona Department of Transportation assisted with averting traffic. Later, a single lane was opened and eastbound and westbound traffic took turns until the investigation was complete and Santa Fe was removed from the area.

An ADOT hazmat team also responded to the area, along with groups from CTI Trucking and Arizona Eastern Railway Company.