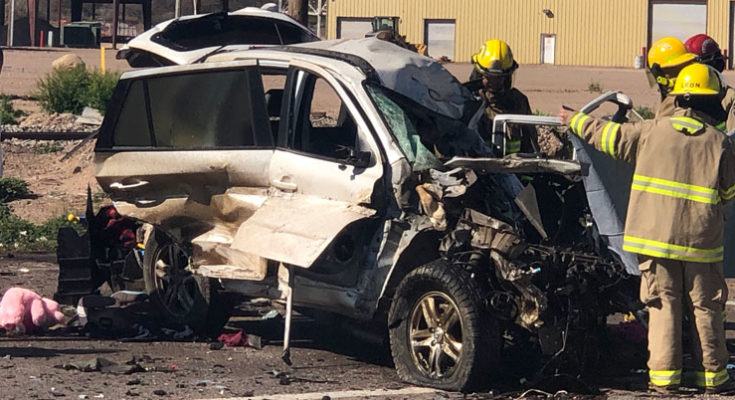 Jon Johnson Photo/Gila Herald: Firefighters work to free the driver of a fatal crash between a white SUV and a CTI semi-truck hauling sulphuric acid Sunday morning. The SUV driver was declared deceased at the scene.

The collision closed U.S. Highway 70 in the western edge of Pima by the Glenbar Gin, with traffic diverted to Bryce/Eden Road to get around.

Firefighters and authorities were dispatched to the scene at about 10 a.m. and came upon the driver compartment of the semi-truck fully engulfed in flames.

According to first responders at the scene, the semi-truck was eastbound when it collided with a westbound SUV. The collision caused severe front-end damage to the SUV and sent the semi off to the south and into the Eastern Arizona Railroad tracks, causing them to buckle. None of the sulphuric acid escaped the truck.

The driver of the semi managed to get out of the vehicle prior to the fire and was taken by paramedics from Lifeline Ambulance to Mt. Graham Regional Medical Center for treatment.

The driver of the SUV had to be extricated by the Pima Fire Department and was declared deceased at the scene. No other passengers were found in either vehicle.

Debris from the crash careened into a nearby residence, damaging the occupant’s door and window.

The crash is under investigation by the Arizona Department of Public Safety. The Graham County Sheriff’s Office also was on scene to assist.