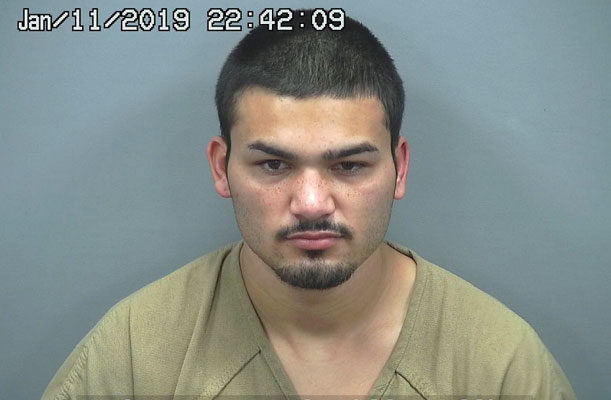 SAFFORD – A man who was reported as running through the Big O Tires parking lot at 1217 W. Thatcher Blvd. while carrying a neon blue purse was later located by officers and arrested on a warrant and drug charges.

Officers were dispatched to the area where Montano was seen at about 12:56 p.m. and eventually located a man matching the suspect’s description running toward the alley behind the Circle K at 1123 W. Thatcher Blvd. The suspect was identified as Montano, who the officers knew had an active warrant for his arrest. Montano did not have a blue purse in his hands but appeared to have something  hidden underneath his coat, according to a Safford Police report.

Montano was then located inside the restroom of the Circle K and was taken into custody for his warrant. During a body search, an officer located a baggie with .2 of a gram of meth and another baggie with .3 of a gram of heroin along with a utility knife blade wrapped up in aluminum foil hidden in a zipper headphone case.

Montano allegedly admitted to having “drugs” in the headphone case but denied possessing a purse and said he didn’t know what the officers were talking about. Despite a search of the area, the purse was not located.

Montano was then transported to the jail and booked on the above-listed charges.